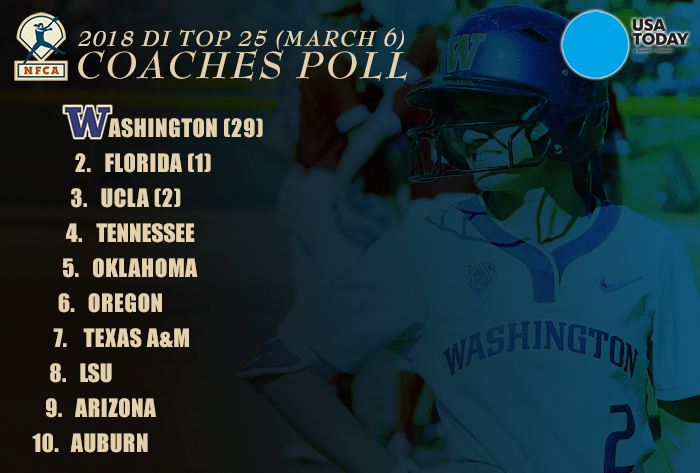 LOUISVILLE, Ky. – No. 1 Washington knocked of Alabama twice and remained undefeated in this week’s USA Today/NFCA Division I Top 25 Coaches Poll. The Huskies (23-0) received 29 first-place votes and 795 points as the Southeastern Conference (5) and Pac-12 (4) Conference own nine spots in the top-10.

Washington welcomed then-No. 11 Alabama to its home-opening tournament. The Huskies began their home campaign with an 8-0 victory over the Crimson Tide and topped them 4-1 the next day. UW also defeated Northwestern (8-2), BYU (7-4) and Portland State (4-1).

Tennessee and Oklahoma switched spots. The No. 4 Lady Vols (21-1) went 5-0 hosting the Tennessee invitational, while the No. 5 Sooners (13-2) defeated Abilene Christian and Missouri State twice during their Marriot Classic.

No. 6 Oregon and No. 7 Texas A&M remained in their rankings. The Ducks (18-4) put forth a 6-1 showing in the Sunshine State. They swept a doubleheader from USF and went 4-1 at Florida State’s tournament. Oregon split with the host Seminoles, topping them 5-0 and falling 2-1 in a game that saw Duck Megan Kleist toss a no-hitter.

The Aggies (18-3) also went 6-1 last week. They swept Sam Houston State at home and added a 4-1 mark at their own Texas A&M Invite, splitting with then-RV Utah and topping Louisiana Tech twice and RV Texas State.

LSU moved from 10th to eighth, sweeping through their home tournament. No. 9 Arizona took a three-game road series from Texas, winning games one and three. Auburn joined the top-10 as the 10th-ranked Tigers (23-2) put together a 5-0 showing at their Wilson/DeMarini Tournament.

USC Upstate makes its first appearance in the top-25. The 24th-ranked Spartans added six victories to their resume, including a 5-0 mark at their Wings Etc. Classic. Minnesota fell out of the top-25 for the first time this season.

The 2018 USA Today/NFCA Division I Top 25 Poll is voted on by 32 NCAA Division I head coaches, one representing each conference. Records reflect games played through March 4.

Dropped Out: No. 21 Minnesota

The 2018 USA Today / NFCA Division I Top 25 Coaches Poll is voted on by 32 NCAA Division I head coaches with one representing each of the NCAA’s Division I Conferences. Records reflect play through March 4, 2018