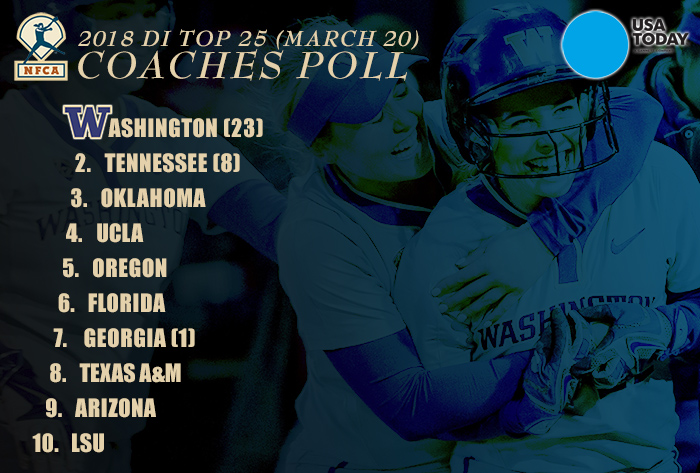 LOUISVILLE, Ky. – Following a wild weekend that saw the top three suffer five defeats, Washington held on to the No. 1 spot in this week’s USA Today/NFCA Division I Top 25 Coaches Poll. The Huskies (29-1) collected 23 first-place votes and 781 points.

No. 1 Washington and then-No. 3 UCLA entered the week as the final two undefeated teams in NCAA Division I and both suffered road defeats on the opening weekend of Pac-12 play. Tennessee, which enjoyed an undefeated week in the Aloha State, is the first program to 30 wins and jumped to No. 2. The Lady Vols (30-1) earned eight first-place votes and 748 points. No. 7 Georgia grabbed the final first-place vote after taking two-of-three from then-No. 2 Florida.

The Huskies had their 28-game winning streak snapped in the league opener at then-No. 13 Arizona State (0-2), but rebounded to take game two, 7-0. UT extended its winning streak to 22 games as it swept through the Bank of Hawai’i Rainbow Wahine Classic, outscoring the opposition, 58-8.

Oklahoma, who is riding a 15-game winning streak, moved up two spots to No. 3 after five wins at the Easton Invitational at Cal State Fullerton.

Texas A&M fell one position to No. 8 after a 5-1 week at home. Arizona remained at No. 9 with a three-game sweep of Utah after dropping a non-conference tilt with Minnesota. LSU rounds out at No. 10. The Tigers (23-4) dropped both games at then-No. 24 Kentucky (1-4, 0-2) after knocking off Western Kentucky.

The 2018 USA Today/NFCA Division I Top 25 Poll is voted on by 32 NCAA Division I head coaches, one representing each conference. Records reflect games played through March 18.

The 2018 USA Today / NFCA Division I Top 25 Coaches Poll is voted on by 32 NCAA Division I head coaches with one representing each of the NCAA’s Division I Conferences. Records reflect play through March 18, 2018