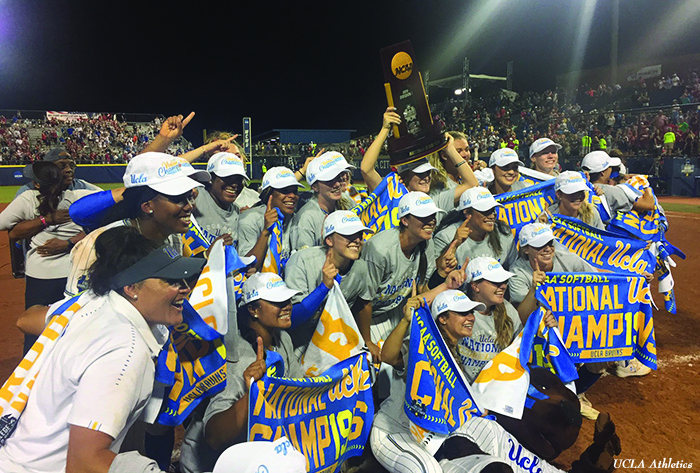 OKLAHOMA CITY– Kinsley Washington’s walk-off single with two outs in the bottom of the seventh lifted No. 2 UCLA to 5-4 win over No. 1 Oklahoma and a 2019 National Championship on Tuesday evening at the Women’s College World Series at USA Softball Hall of Fame Stadium/OGE Energy Field.

With the victory, the Bruins (56-6) lifted their 12thnational championship trophy, first since 2011. UCLA hit four more home runs, eight over the final two games, but it was a single that ended up being the biggest hit of the night.

Taylor Pack led off the frame with a single and was sacrificed over to second. However, she was cut down at third on a grounder to short. With two outs, a wild pitch moved Colleen Sullivan to second and she was immediately lifted for pinch runner Jacqui Prober. On a 1-0 pitch, Washington’s single to left center dropped in and Prober just beat the throw home for the winning run.

Rachel Garcia, who was named the WCWS’s Most Outstanding Player, picked up her fifth win of the WCWS and ninth of the postseason. Garcia (29-1) went the distance, scattering eight hits, striking out four and walking three.

The Sooners (57-6) capped off a fantastic season as the runner up in their third WCWS Championship Series in four seasons.

After homering four times the night before, UCLA was back at it in the bottom of the first as the first two batters of the inning, Bubba Nickles and Briana Perez, homered for a quick 2-0 lead. Nickles took an inside pitch for G Juarez and sent her offering over the fence in left. Perez followed by lacing a 1-0 pitch to centerfield.

Sydney Romero joined the home run parade with a towering solo blast to left centerfield that put the Sooners on the board in the top of the third. UCLA quickly retained its two-run lead when Aaliyah Jordan led off the bottom half of the frame with the fourth solo home run of the game, a bomb to dead centerfield.

The Sooners evened the contest at three-all with two runs in the top of the fourth. Fale Aviu got it started with a RBI single to right center that scored Nicole Mendes from second. Pinch runner Raegan Rogers moved up on a passed ball and came around to score on Lynnsie Elam’s double off the glove of leaping leftfielder Kelli Godin.

Brianna Tautalafua led off the bottom of the fifth with a rocket into the leftfield bleachers. Her go-ahead dinger put the Bruins back on top, 4-3. She finished 3-for-3 with a run and RBI.

With her team down their last out, Shay Knighten came through with a solo round tripper in the top of the seventh, evening the game at 4-4 and setting up the walk-off win for the Bruins.

Jordan and Washington recorded two hits apiece for the Bruins. Romero and Mendes each had two hits for the Sooners.