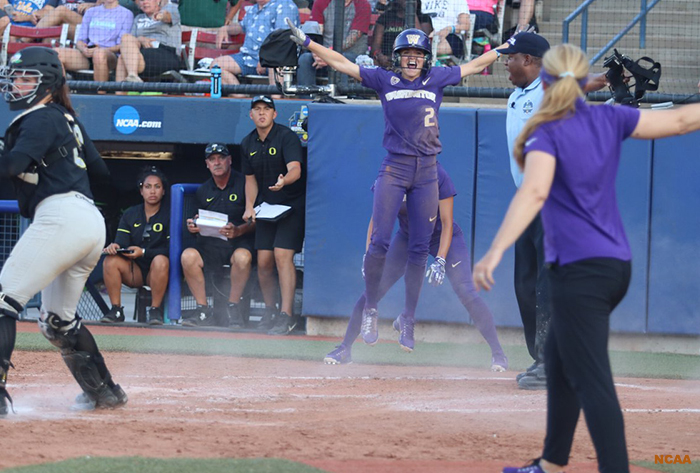 OKLAHOMA CITY – In front of 9,311 fans, No. 5 Washington and No. 3 UCLA earned their spots in the semifinals of the 2018 Women’s College World Series after an exciting day two at ASA Hall of Fame Stadium.

Six strong innings from Gabbie Plain and a four-run fifth keyed Washington to a 6-2 victory over Oregon in the first winner’s bracket game on Friday evening. In the nightcap, Taylor Pack’s three-run home run sparked a fourth-inning rally as UCLA earned a 6-5 comeback victory over Florida.

Plain (22-4) tossed five shutout innings before being relieved by Taran Alvelo in the sixth. She would reenter with no outs in the seventh and finish off the game. She allowed an unearned run on four hits with a strikeouts and three walks.

Washington broke the scoreless deadlock with four runs in the bottom of the fifth. After the first run scored on a bases loaded fielder’s choice, Taylor Van Zee laced a two-run single to right which chased Oregon starter Megan Kleist (21-7) and put the Huskies up 3-0. Sis Bates’ bloop double to shallow rightfield tacked on the final run of the inning.

The Huskies added two more in the sixth. Taryn Atlee stroked a run-scoring double to leftcenter and Trysten Melhart knocked another run in with a groundout to shortstop.

Oregon spoiled the shutout with two runs in the top of the seventh coming on a RBI grounder and a run-scoring single by Gwen Svekis.

Van Zee was 2-for-4 with two RBI for the Ducks. Lauren Lindvall recorded two of Oregon’s six hits.

UCLA rallied from a 4-0 hole for the second straight night this time edging Florida, 6-5, in an exciting nightcap. The Bruins’ put a five-spot on the board in the top of the fourth and Rachel Garcia held off the Gators for the victory.

Garcia (29-3) grinded through a 15-strikeout performance in which she struck out the side four times. The sophomore righty scattered seven hits, allowed five runs, four earned, and walked two.

Trailing 4-0 and hitless, UCLA responded in the top of the fourth with five runs on just one hit. That hit just happened to be a go-ahead three-run homerun by Taylor Pack that just cleared the leftfield fence. It also was the first hit off starter Kelly Barnhill, who fanned the first eight batters of the game.

In the inning, the Bruins benefitted from a throwing error, two walks and a hit-by-pitch by Barnhill. The first run scored on a bases loaded free pass and the second on a bang-bang play at the plate when Aaliyah Jordan tagged on a foul out down the leftfield line.

The teams traded solo home runs in the sixth inning. Bubba Nickles crushed hers into the leftfield seats to put the Bruins up 6-4. In the bottom half of the frame, Jordan Roberts matched Nickles by clubbing her second straight pinch-hit homer in as many games to make it a one-run contest.

After the long ball, the Gators put runners on the corners with two outs, but Garcia induced a groundout to short by Amanda Lorenz to end the threat. She ended the game by striking out the side in the seventh.

The Gators jumped out to a 4-0 lead after three innings. They scored an unearned run in the bottom of the first on a wild pitch. Sophia Reynoso made it 2-0 with a solo shot to left in the second and Kayli Kvistad crushed a two-run homer into the right centerfield bleachers to put the Gators up 4-0 in the third.

Kvistad was 3-for-4 with a homer, two RBI and a run scored. Reynoso finished 2-for-2 with her home run, a RBI and run scored.

The Bruins only mustered three hits off of Barnhill (29-3), who went the distance and suffered just her second loss of the season. Only one of the six runs she allowed was earned as she struck out 13, walked two and hit a batter.