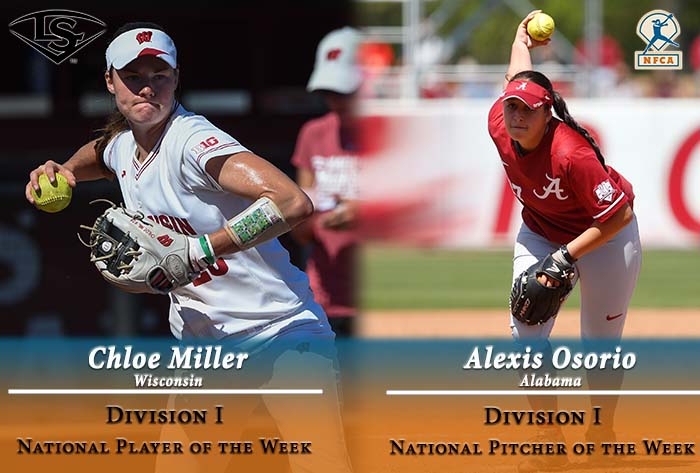 Miller had a monster weekend at the plate for the 24th-ranked Badgers. Helping Wisconsin to a 5-0 showing the Colorado State Classic, she hit .800 (12-for-15), slugged 1.800 and registered an .842 on-base percentage. The Bettendorf, Iowa native connected on three home runs, recorded four doubles and one triple, while not striking out and walking four times. Additionally, Miller, a senior, knocked in 14 runs, including three four-RBI games, and scored 11 times.

"I am unbelievably honored to be named NFCA player of the week," said Miller. "This is one of those awards you don't get if the rest of your line up isn't helping and when the person behind me hits really well then they can't pitch around. It's nice to see all of the hard work we've been putting in start to pay off."

A native of Riverside, Calif., Osorio went 4-0, including all three wins in the 11th-ranked Crimson Tide’s SEC-opening series against RV Arkansas. She tossed 19.2 shutout innings to push her current scoreless streak to a career-best 35 innings.  The hard-throwing junior fanned 39 batters, a tick under two per inning, including an 18-strikeout one-hit performance last Tuesday against Illinois-Chicago. Osorio, the 2017 NCAA leader in strikeouts, posted her third 18-plus punchout game of the year and brought her season total to 161 in just 65.2 innings of work. Named SEC Pitcher of the Week for the third time this season, Osorio surrendered just three hits, holding batters to an .066 batting average.

“This is such an honor to receive this award," Osorio said. "Thank you to the NFCA and thank you to my teammates and coaches who have pushed me to my full potential from the start. I’m truly honored and thankful for receiving this award.”