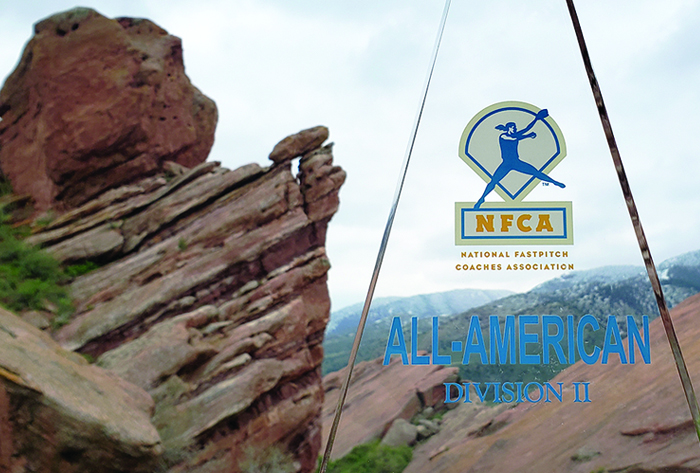 LOUISVILLE, Ky. – Fifty-one student-athletes from 38 different institutions have been chosen to one of three 2019 NFCA Division II All-America teams, the Association announced at the NCAA Division II Championships banquet on Wednesday evening at the DoubleTree Hotel by Hilton in Denver, Colo.

In addition to the All-Americans, the Diamond Sports / NFCA Catcher of the Year and New Balance/NFCA Golden Shoe awards were announced. LIU Post senior Julia Seader and Wilmington junior Rosa’Lynn Burton were the recipients, respectively.

Additionally, there are 13 returning honorees, including a trio of three-time selections - first-teamers Kylee Smith of North Georgia, Christa Reisinger of Truman State and AnnMarie Torres of Colorado Mesa.

Trevecca Nazarene’s duo of MaKray Odom and Mary Collins earned nods at first-team shortstop and utility-non-pitcher, respectively. Odom, a finalist for Schutt Sports / NFCA Player of the Year, is one of two players in Division II with 100 base hits. Most of this season Odom ranked at the top of the NCAA Division II batting average list and is currently second with a .565 average. She is second in runs per game (1.26), fourth in stolen bases (1.06) and fourth in on-base percentage (.590). Collins turned in an impressive senior year which concluded with the second most home runs (19) in Division II and the nation’s best slugger at .992. Collins led the G-MAC in slugging, RBI (53), homers and total bases (124).

Seader, a finalist for Schutt Sports / NFCA Player of the Year, is Division II’s top home run hitter with 20 and also leads the nation with 160 total bases. The East Coast Conference Player of the Yearranksfifth in hits (91), ninth in slugging (.861) and ninth runs batted in (59).

Lipovsky, along with Smith and Concordia Irvine’s Callie Nunes, repeated as the first-team pitchers and are finalists for 2019 Schutt Sports / NFCA Pitcher of the Year. Joining them on the first team with an at-large pitching accolade is Tampa’s Makaleigh Dooley.

Lipovsky has guided the Lakers to a 49-8 record and their second national championship appearance in the last four seasons. The senior righty was named the Great Lakes Valley Intercollegiate Conference (GLIAC) Pitcher of the Year for the second season in a row. Lipovsky racked up a 31-2 record with a 0.82 ERA and 17 shutouts in her 35 starts. In 224 innings of work, she has struck out a Division II-best 326 batters to just 44 walks, while opposing offenses are batting just .154.

This is Smith’s third straight year on the first team. The junior ranks second behind Lipovsky with 318 strikeouts and third with 30 victories. The three-time Peach Belt Pitcher of the Year played an instrumental role in the NightHawks’ six straight PBC title, posting a 30-4 mark with the nation’s lowest ERA at 0.73 in 220.1 innings of work.

Nunes led Concordia Irvine to its first NCAA Division II Super Regional in 2019. The sophomore righty leads the country with 33 wins and is fourth with 266 strikeouts. The two-time PacWest Pitcher of the Year twirled four no-hitters, posted a 33-6 mark and 1.34 ERA, while holding her opponents to a .153 average.

Dooley is back for a second time after a second-team at-large selection in 2018. The senior hurler led the Spartans to a NCAA Regional final in the South Region. Dooley, the Sunshine State Conference Pitcher of the Year, ranks fourth overall with a 1.02 ERA, fifth with 28 wins and 10thwith 231 strikeouts.

The other two three-time All-Americans, Reisinger and Torres, collected honors in the outfield and at first base, respectively, and are also Player of the Year finalists. Reisinger concluded a stellar four-year career with a monster senior campaign. The three-time All-American is making her second appearance on the first team after hitting .544 with 86 hits, 10 doubles, five triples, 13 home runs, 36 RBI and 75 runs scored. She swiped 60 bases in 66 attempts, tying for the most swipes in Division II and owns the nation’s best on-base percentage (.619) and leads in runs per game (1.47).  She is currently second in in steals per game (1.18), third in batting average, third in total bases (145), fourth in slugging percentage (.918) and eighth in total hits (86).

Torres makes her first appearance on the first team after a pair of third-team honors. The junior first baseman led the Rocky Mountain Athletic Conference (RMAC) in multiple statistical categories, driving in 68 runs to rank second nationally.  She is also fifth in the country with her .587 on-base percentage and sixth in walks, drawing 45, good for a 0.80 per game average. The RMAC Player of the Year topped the league with her .458 batting average and ranks second in with her .817 slugging percentage and third in both runs scored (57) and hits (70).

The first teamers at second base and third base are Cameron’s Khmari Edwards and Central Oklahoma’s JoBi Heath, who played key roles in their respective program’s runs to Super Regionals.  Edwards, a finalist for Schutt Sports / NFCA Division II National Freshman of the Year, led the Aggies with a .399 batting average, while recording, 67 hits, 45 runs, 11 doubles, eight homers, 44 RBI and 27 stolen bases. Additionally, she fielded at a .953 clip, slugged .607 and registered an .465 on-base percentage.

Heath is another finalist for the Schutt Sports / NFCA Division II National Player of the Year. The senior capped off her career with tremendous season, helping the Bronchos obtain the No. 1 ranking in the Central Region and the NFCA Top 25 Coaches Poll. She leads the nation in RBI (77) and doubles (24) and sixth in total bases (143). The Great American Conference Player of the Year also belted 15 home runs and is hit .407 with a .786 slugging percentage.

Kutztown’s Sara Keeny, who matched Odom with a DII-best 100 hits, and Burton are the final two finalists for Player of the Year. The duo, along with at-large selection Olivia Jankowski from Edinboro, round out the outfield honorees. Keeny enjoyed a career year for the Golden Bears on her way to one of the best hitting seasons in the program's 44-year history. Along with her 100 hits, Keeny currently ranks fourth in batting average (.518), which is a program record, and eighth in on base percentage (.561). The Pennsylvania State Athletic Conference East Athlete of the Year registered 62 runs scored, 15 doubles, seven triples, 45 stolen bases and a .684 slugging percentage.

Burton, who was tabbed the New Balance / NFCA Golden Shoe recipient, was a perfect 60-for-60 swiping bases, tying for the NCAA lead with that total and edging out her counterpart by .02 in the per game category (1.20). Burton finished her junior campaign batting .517 with 91 hits, five doubles, five triples and one long ball. Currently ranked fifth nationally in average and hits, Burton has already shattered the program’s career hits record, finishing with 266, 66 more than the old mark.

Jankowski is the first Fighting Scot to be named to the NFCA First Team and just the second player in program history to earn NFCA All-America honors, joining Dana Webb (third team in 2009). Jankowski topped the squad with a .479 average, program-record 13 doubles, 10 round trippers, 44 RBI, an .880 slugging percentage and .559 on-base percentage. Here average, home runs and RBI were second-highest in school history.

Rounding out the first team is designated player Tymber Riley of Arkansas Tech and utility-pitcher Taylor Robblee of California (Pa.). Riley enjoyed a strong debut season, leading the Golden Suns with a .398 average, 12 home runs and .764 slugging percentage. She added 45 runs, seven doubles, a triple and a .497 on-base percentage.