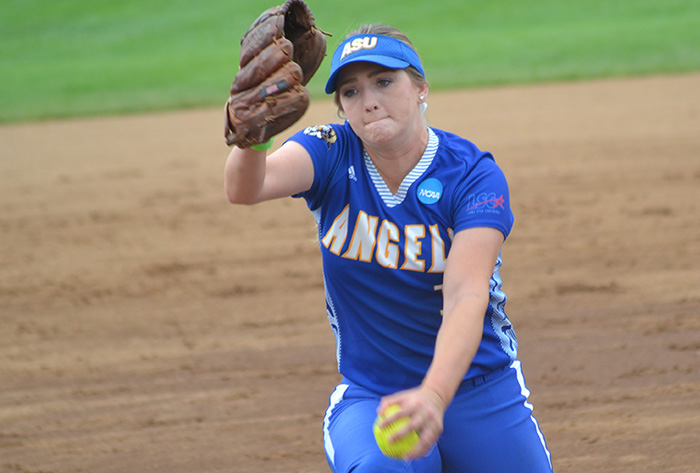 SALEM, Va. – The top two seeds Angelo State and Minnesota State will face off in the NCAA Division II Softball Championship Series after picking up wins in the semifinals on Saturday evening at the Moyer Sports Complex.

Following elimination game wins by Armstrong State and West Virginia Wesleyan, the Rambelles (60-5) defeated the Pirates and the Mavericks (62-7) topped the Bobcats (51-10) to advance to the series.

It marks the second appearance for Angelo State, who won the 2004 title in its only other final, while the Minnesota State advances for the first time in program history.

The season ended for four programs – Armstrong State, West Virginia Wesleyan, West Florida and Humboldt State. For the Pirates (38-14), it marked the last athletic event in the university’s history as the school is merging with Georgia Southern University.

Angelo State scored six unanswered runs to earn an 8-3 victory over Armstrong State and clinch a spot in the Championship series.

The Rambelles opened the scoring on a two-run homer by Madison Greenwell in the bottom of the third, only to be answered by three runs in the top of the fourth by the Pirates

Angelo returned the favor and took the lead of good in the bottom of the fourth by scoring four runs with two outs. The rally was capped off by a two-run single by Bailey Wallace.

The Rambelles added two insurance runs in the bottom of the sixth.

Morgan Hill (10-0) picked up the win, tossing the first four innings, while Kenedy Urbany picked up the save with three innings of shutout ball.

Minnesota State advanced to the Championship series with a 5-2 triumph over West Virginia Wesleyan in the second semifinal of the evening.

After the Bobcats opening the scoring on a RBI single by Olivia Gore in the first inning, the Mavericks scored five straight, including three in the top of the seventh to take command of the game.

Coley Ries (39-3) went the distance allowing an earned run on five hits with eight strikeouts and did not issue a free pass.

Alyssa Rickels evened the contest with a run-scoring single in the second and the Mavericks took the lead for good on a throwing error in the third. Rickels finished 3-for-3.

In the seventh, Ashley Thell launched a two-run homer to right center and Samantha Buhmann added the final insurance run with a RBI double. WVWC threatened in the bottom half of the frame, pushing one across and having the tying run come to bat. However, Ries induces a popup to end the comeback bid.

Tazha Williams launched a two-out grand slam in the top of the seventh to break a scoreless deadlock and lift Armstrong State to a 5-1 victory over Humboldt State and a trip to the semifinals.

Through six innings, the game was a good old-fashioned pitchers duel between the Pirates’ Jane Trzaska and the Jacks’ Madison Williams (25-11). Trzaska allowed just one hit and Williams recorded nine strikeouts

That all changed in the top of the seventh. Trzaska helped herself out with a leadoff single and with two outs and the bases full of Pirates, the Peach Belt Freshman of the Year, Williams, deposited an 0-2 pitch over the right centerfield wall for a 4-0 lead. Katie Collins added a RBI single for a 5-0 advantage.

Breonna Bejaran spoiled the shutout with a solo long ball in the bottom of the seventh. She finished with the Jacks’ only two hits.

Trzaska (19-7) finished the game with a two-hitter, walking one and fanning four. Williams allowed four earned runs on seven hits with 12 strikeouts.

Hannah Vet twirled her second shutout of the tournament and a bases loaded hit batter in the bottom of the fifth was the game’s only run as the Bobcats advanced to the semifinals with a 1-0 victory.

In the fifth, Tori Pogue led off with a bunt single and Olivia Gore reached on catcher’s interfence. With two outs, Morgan Bruce drew a walk and Sara Scoone was hit to knock in Gore with the lone run.