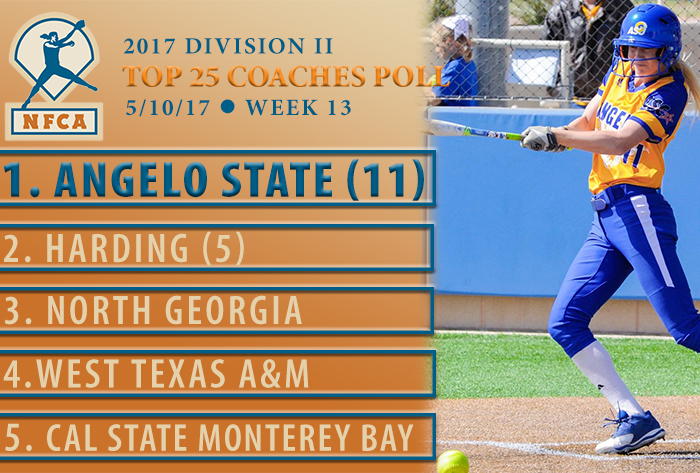 LOUISVILLE, Ky. – As we head into postseason play, Angelo State, the top-seed in the South Central Region, will be the No. 1 team in the last NFCA Division II Top 25 Coaches Poll of the regular season. The season’s final poll will be released following the conclusion of the 2017 Division II Softball Championships, May 25-29 in Salem, Va.

The Rambelles (52-5), who captured the Lone Star Conference (LSC) regular season title, saw the gap between No. 1 and No. 2 tighten. They received 11 first-place votes and 395 points. Angelo was the runner-up in the LSC Tournament, falling to then-No. 5 West Texas A&M in the championship game, 2-1. Despite the defeat, Angelo State held on to the South Central’s No. 1 seeding and will host a four-team regional with No. 11 Colorado Mesa, Cameron and Lubbock Christian in San Angelo, Texas.

Harding and North Georgia continued their respective holds on the No. 2 and 3 spots. The Bison (54-6) double-dipped winning the Great American Conference (GAC) regular season and tournament titles, both firsts in their young program history. Receiving five first-place votes and 388 points, they swept through the field in Bentonville, Ark., posting two shutouts and knocking off No. 21 Southern Arkansas in the semifinals (4-0) and finals (9-2). Harding earned the No. 1 seed in the Central Region and will host its four-team regional with the Muleriders, RV Winona State and Missouri Western in Searcy, Ark.

North Georgia has had some time off as it won its conference tournament two weeks ago. The four-time defending Peach Belt champs are the No. 1 seed in the Southeast. The Nighthawks (44-10) will host No. 13 Lenoir-Rhyne, Limestone and North Greenville in their regional in Dahlonega, Ga.

LSC tournament champion West Texas A&M bumped up a spot to No. 4, while Cal State Monterey Bay fell to No. 5 after a 1-2 showing as the No. 1 seed in the California College Athletic Association (CCAA) Tournament. The Lady Buffs (42-9) scored two runs in the top of the seventh to edge Angelo State for the title. WT will host the other South Central Regional, welcoming No. 20 St. Mary’s, Texas Woman’s and Tarleton State to Canyon, Texas.

The Otters (43-11) did hold onto the West Region’s No. 1 ranking despite their exit from the CCAA tourney. CSUMB will host No. 23 Dixie State, Sonoma State and Western Washington in Seaside, Calif.

Minnesota State extended Division II’s longest active winning streak to a program-record 24 games after claiming the Northern Sun Intercollegiate Conference tournament with four wins last weekend. The Mavericks (54-6) join Harding with the most victories heading into the postseason and are one win shy of setting a program record. Minnesota State is the No. 2 seed in the Central Region and will host No. 16 Central Oklahoma, Pittsburg State and Augustana in Mankato.

Mountain East champ West Virginia Wesleyan and idle Pfeiffer remained at No. 7 and 8. The Bobcats (44-7) were forced to an if-game by UVa-Wise, but came out on top, 3-0 for the 2017 title. WVWC claimed the No. 2 ranking in the Atlantic Region and will host Bloomsburg, Kutztown and Charleston in Buckhannon.

Dropping to No. 9 is was Southern Indiana after a 1-2 outing as the No. 1 seed at the Great Lakes Valley Conference Tournament. The Eagles (41-12) earned the No. 2 seed in the Midwest Region and will host No. 22 Saginaw Valley State, Indianapolis and Grand Valley State in Evansville.

No. 10 West Florida stayed put after it went 1-1 at the Gulf South Tournament. The Argos (40-13) entered as the No. 2 seed and knocked off Shorter before falling to RV and eventual tournament champion Mississippi College. West Florida retained the No. 1 seed in the South Region and will host the previously mentioned Choctaws, RV Valdosta State and Claflin.

GLVC tournament champion No. 25 Missouri-St. Louis returned to the rankings and will be the No. 1 seed in the Midwest, hosting RV Wayne State (Mich.), Truman State and Kentucky Wesleyan.

The NFCA Division II Top 25 Poll is voted on by 16 NCAA Division II head coaches with two representing each of the eight NCAA regions. Records reflect games played through Sunday, May 7.

Dropped Out: No. 22 Wayne State

The NFCA Division II Top 25 Poll is voted on by 16 NCAA Division II head coaches with two representing each of the eight NCAA regions. Records reflect games played through Sunday, May 7.