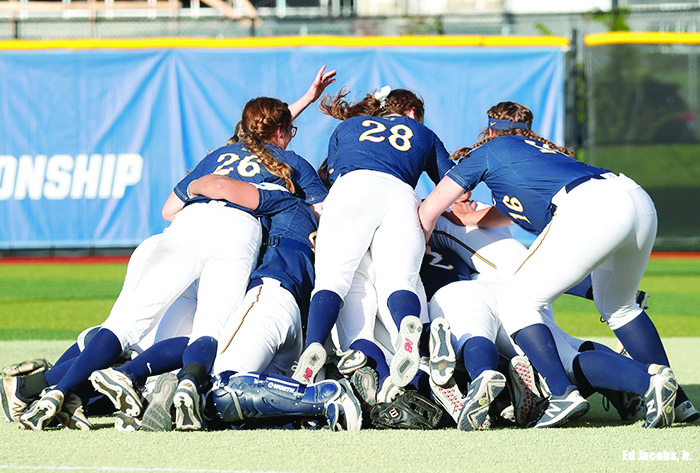 DENVER, Colo - Needing a pair of wins on Memorial Day, the Augustana Softball team rallied for a pair of 6-4 victories against the Javelinas (52-10) to claim the 2019 Division II Softball National Championship.

The title marks the second in program history for Augustana. The Vikings (61-11) claimed the 1991 national title under legendary coach Sandy Jerstad. This season, Augustana also tied the program record for wins in a single season with 61.

In games one and two, Augustana once again received a stellar pitching performance from Tournament MVP Ashley Mickschl (32-6) who tossed a total of 7.1 innings with six strikeouts. Maggie Kadrlik was the difference in game one, hitting two home runs, driving in three total runs.  In game two, the Vikings scored six unanswered runs topped off by Kendall Cornick's two-run single in the top of the sixth, putting Augustana ahead for good.

Game one saw the Vikings take a 2-0 lead on Maggie Dunnett's two-run blast in the top of the second. A three-run third by the Javelinas gave them a 3-2 advantage. Loren Kelly evened the score with a two-run single, followed by Makenzie Mays' run-scoring single.

An RBI single by Kara McDougall tied it at 3-3 in the fourth. Augustana took the lead for good on Kadrlik's two-run long ball in the fifth.

Roxy Chapa cut the deficit to 5-4 with a solo homer in the bottom half of the fifth. Kadrlik got the run back with her second dinger of the game in the top of the seventh.

Mickschl tossed the final four innings, allowing a run on two hits with two punchouts and one walk. Breanna Smith sufferered the defeat for the Javelinas.

In game two, TAMUK jumped out to a 4-0 lead with two runs in the first and second innings. Chapa opened the scoring with a RBI single to center and an error made it 2-0. In the second, Victoria Schoonard-Saborio doubled the lead in the second with a two-run round tripper.

A three-run third got the Vikings back in the game. Shannon Petersen tied the ball game with an RBI double to the rightfield in the fifth setting upd Cornick's sixth-inning heroics.

Mickschl once again provided 5.1 innings of shutout relief, allowing the Vikings to come back. She struck out four, walked one and allowed three hits.