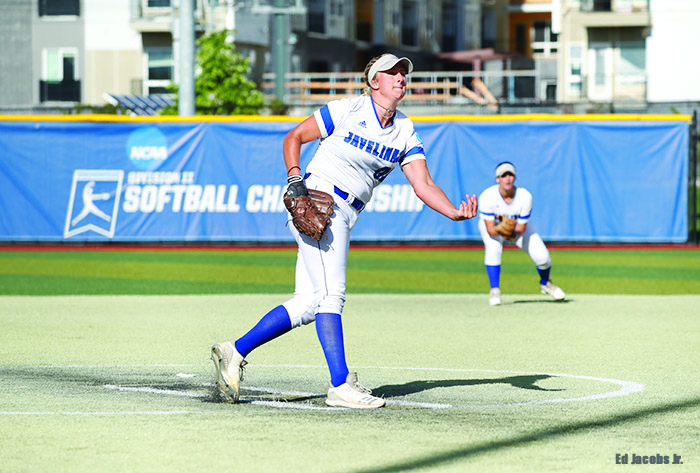 DENVER, Colo. – No. 4 Texas A&M-Kingsville and No. 3 Augustana will face off for the 2019 NCAA Division II National Championship following semifinal victories today at the Regency Athletic Complex on the campus of Metro State.

TAMUK edged No. 5 Grand Valley State, 3-2, while Augustana shut out No. 8 Young Harris, 6-0. The Javelinas will play for a national championship for the first time, while it marks the third time for the Vikings, winning it all back in 1991.

In the first semifinal, the Javelinas (51-8) scored three runs in the first and held off a late rally by the Lakers (50-10), which advance them to their first-ever National Championship Series. Semifinal No. 2 saw Ashley Mickschl and Amber Elliott combined on a two-hit shutout for the Vikings.

GVSU rallied late in its first elimination game of the day to upend No. 2 West Florida, 3-2 in eight innings. The Mountain Lions (44-20) reached the semifinals for the first time in program history with a 4-0 triumph over No. 7 West Chester.

Nikoma Holmen sent the game to extras with a two-run homer in the seventh and freshman Lydia Goble won it with a walk-off sac fly as Grand Valley rallied late to defeat West Florida to reach the national semifinals and a date with Texas A&M-Kingsville.

Just prior to Holmen’s and Goble’s heroics, the Argonauts (54-11) grabbed a late 2-0 lead with two runs in the top of the sixth thanks to a Rhiannon Sassman RBI double and Kathleen Smiley’s run-scoring single.

UWF’s Grace Gilbert and GVSU’s Allison Lipovsky matched zeros for the first five innings, with Gilbert not getting touched up until one out in the seventh. Gilbert (25-5) was the tough luck loser, surrendering three runs, two earned, on six hits with on punchout and one walk. Lipovsky (33-3) scattered seven hits, fanned eight and issued three free passes.

Holman had two of the Lakers’ six hits, while Teala Howard led the Argos with a 3-for-4 outing.

Nikkie Kovalesky continued to shine in the circle for Young Harris as the righty twirled a three-hit shutout against West Chester and helped the Mountain Lions stave off elimination with a 4-0 victory to earn a berth into the national semifinals against Augustana.

Kovalesky fanned three and walked one to improve to 2-1 in the tournament. Grace Botti’s sac fly in the fifth was the only run Kovalesky needed. However, her teammates gave Kovalesky some cushion with a run in the sixth and two more in the seventh on a two-run double by Morgan Curley.

Emily Maseth and Gillian Thomas doubled for WCU with Courtney Stump recording the other base knock.

Texas A&M-Kingsville scored three runs in the first and held on for a 3-2 win in the first national semifinal of the day.

With two outs in the bottom of the seventh, Morgan Wagner roped an RBI double to the right centerfield gap to cut the Lakers’ deficit to one run and put the tying run in scoring position. However, Javelina hurler Breanna Smith induce a chopper to first to end the threat.

In the pivotal first inning, Roxy Chapa opened the scoring with an RBI double to left center. With two outs, back-to-back run-scoring infield singles to shortstop by Makenzie Mays and Amber Reyes extended the lead to 3-0.

The Lakers got one back in the bottom half of the first on Lydia Goble’s second home run of the tournament.

Lipovsky (33-4) suffered the defeat as she scattered seven hits, struck out nine and issued three free passes in a complete game effort.

Mickschl and Elliott combined on a two-hit shutout as Augustana blanked Young Harris, 6-0 in the second national semifinal.

The Vikings jumped out with a pair of runs in the bottom of the first on Shannon Petersen’s two-out, two-run double. Petersen also drew a bases loaded walk to bring her RBI total to three.

Kendall Cornick doubled the lead to 4-0, lining a two-run opposite-field homer to left in the third. An infield RBI single added another run in the same frame to push Augustana’s lead to 5-0.

Emily Harris and Katelynn Hodges each singled for YHC as record-setting season came to a close.