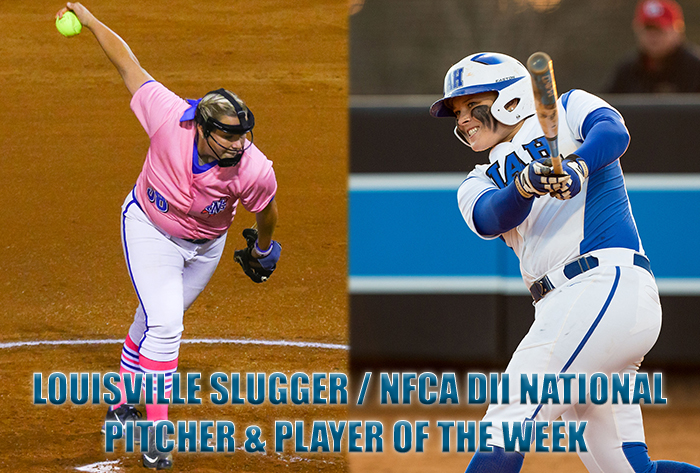 LOUISVILLE, Ky. – A historical power surge and a conference tournament MVP performance led to University of Alabama in Huntsville’s Kaitlyn Bannister and North Georgia’s Courtney Poole garnering the final Louisville/Slugger NFCA Division II National Player and Pitcher of the Week honors for the 2016 season, announced the Association on Wednesday afternoon.

Bannister turned in a gigantic numbers over the weekend in a three-game sweep at Gulf South Conference foe Union. The junior from Albertville, Ala. recorded 20 RBI, four home runs, including two grand slams, eight runs scored and a 1.667 slugging percentage. In addition, she was flawless at third base, recording 12 assists without an error.Her performances were record-setting as she established UAH’s single-game record for RBI with 10 in the series opener, going 4-for-5 with a double and two home runs.

“Teamwork is where it all starts, and without my teammates working hard and getting on base for me to knock them in, none of this would have been possible,” said Bannister. “This award is such an exciting honor, knowing that all my hard work and the opportunities Coach Stuedeman have given me have paid off.”

In the series finale, Bannister became only the sixth player in Division II history to hit two grand slams in a game, which aided her in a nine-RBI outing. Bannister doubled her season’s grand slam total and is just the third-ever DII player to log four in a season, while her 20 RBI brought her season total to a UAH single-season record 80.

“I have seen a lot in my coaching career,” head coach Les Stuedeman said. “I have seen some kids have great days and weeks and huge moments. I have never seen 20 RBI over three games. The thing about it is, if you watch her hit, you expect it. It doesn't even surprise anybody that she did it.”

Poole closed out the regular season helping the Nighthawks claim their third Peach Belt Conference title and a bid to the NCAA Division II Softball Tournament. Highlighted by a no-hitter in the tournament, the senior righty went 5-0 with a 0.48 ERA, four shutouts and 21 strikeouts, while holding her opposition to a .141 batting average. Follow her performance, Poole improves to 49-2 on the year with a 0.62 ERA and 406 strikeouts.

“It’s a great honor to be recognized by the NFCA but this is really a recognition for our entire team,” Poole said. “We had a great weekend at the Peach Belt Conference Tournament and it was an amazing experience to be able to win another championship with my teammates. We’re all looking forward to starting the NCAA Tournament next week."

After twirling a pair of shutouts against Montevallo (11 IP, 6 K, 6 H) to close out the regular season, Poole silenced Francis Marion in the first round of the PBC tournament. The Watkinsville, Ga. native struck out two and walked one for her fourth no-hitter of the season and sixth of her career. On the final day of the tournament, the PBC tournament MVP tossed 13 innings, which included a two-hit, nine-strikeout shutout in the title-game victory against USC-Aiken.

"We are excited for all of the national recognition that Courtney has received and she deserves every bit of it,” said head coach Mike Davenport. “She has a tremendous work ethic and it has shown in her improvement ever year in her time here at UNG. Courtney has made her mark in the school, conference, and national record books and we couldn’t be more proud to call her a Nighthawk."