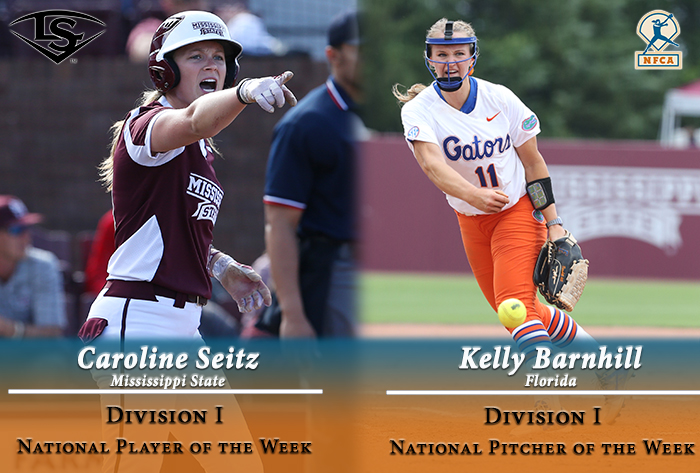 Capping her week off with a no-hitter, Barnhill continued her season’s dominance in the circle, posting a 4-0 record without allowing a run and fanning 47 (2.04 per inning) against nationally-ranked competition. The hard-throwing sophomore also limited Georgia (3), Florida State and Kentucky (2) to just five hits (0.81 avg.) over 23 innings. Barnhill recorded three shutouts and held the then-No. 1 Seminoles scoreless over the final two innings (3 K) of a 1-0 walk-off victory to improve to 18-0 and lower her NCAA-best ERA to 0.19. In the final game against the then-No. 21 Wildcats, she fanned a season-high 15 and was one free pass away from a perfect game as the Gators clinched the SEC series. Barnhill also struck out 15 in game one of the series, a two-hit shutout. The Marietta, Ga. native opened the week with 14 punchouts in a three-hit shutout of the then-No. 19 Bulldogs to complete the league sweep.

“It feels amazing to be selected as the NFCA Pitcher of the Week, but what’s more important is that the Gators won the weekend series with good defense and timely hitting against a tough SEC opponent," Barnhill said. "I am truly humbled by the award, there are many great pitchers and players in this game and to be chosen is a great honor. My performance would have not been possible without my pitching coach and my catcher Janell Wheaton; with Janell behind the plate, my job gets a little easier.”

Seitz was a one-woman wrecking crew, launching four home runs, two grand slams, and driving in 14 runs helping Mississippi State to a SEC series win at then-No. 19 Georgia. The senior third baseman became the first Bulldog to hit grand slams in back-to-back games and the first player in program history to homer four times in a single SEC series. Over the three games, she hit .700 (7-for-10) with four runs and a 1.900 slugging percentage, while her 14 RBI was one run more than Georgia scored in the series. Seitz, hailing from Birmingham, Ala., launched her first grand slam and drove in six in a 9-4 game-one win. She concluded the week by leaving the yard twice, the first one tying the game at 2-2, and knocking in three to help clinch the series with a 5-2 triumph. In game two, she cranked her second grand slam and recorded five RBI in a 7-6 defeat.

“It really is an honor to receive this award," said Seitz. "Honestly it was kind of a surreal weekend. I catch myself kind of grinning when I think about it. I am just glad I got to experience it with my teammates and help our team get the series win on the road. Our pitchers looked great as well and we are really coming together at the right time.”