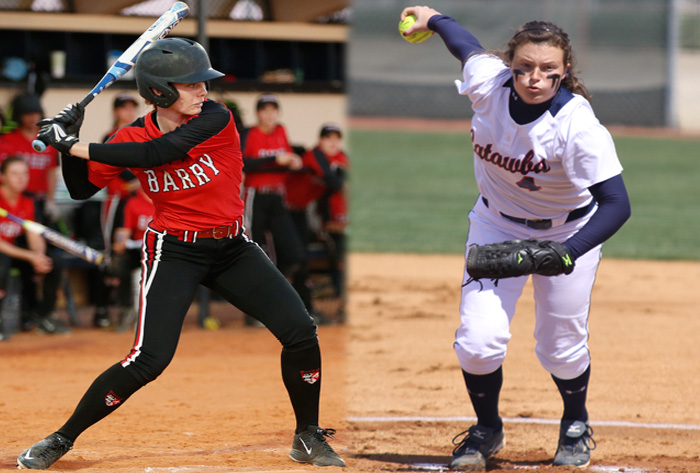 LOUISVILLE, Ky. –Barry junior Cheyanne Head and Catawba senior Carley Tysinger were named the Louisville/Slugger NFCA Division II National Player and Pitcher of the Week, respectively on Wednesday afternoon. The each earned their first nod after outstanding play during the week of Feb. 15-21.

Head was nearly perfect at the plate in Barry’s three-game Sunshine State Conference (SSC) series sweep of Nova Southeastern. The Surrey, B.C. native finished 9-for-10, walked twice, recorded five doubles, eight RBI and six runs. She swiped three bags, one in each contest, and posted .1.400 slugging and .917 on base percentages.

“Our team really came together this week, demonstrating our passion and perseverance,” commented Head. “We came out, played our own game and had fun doing it, which is why we were so successful. I always play better when I'm relaxed, having fun and know that the rest of my team is there to pick me up.”

Doing her damage from the three-hole, Head went 4-for-5 with two doubles, three RBI and three runs scored in game one. The designated played followed with a perfect outing in day two’s doubleheader sweep. She went 5-for-5 with two walks, three doubles, five RBI and three runs scored.  She doubled twice in game two and knocked in three runs in the series finale. In addition, Head was selected the SSC Player of the Week.

Tysinger, hailing from Lexington, N.C., had a memorable weekend in the circle for the now seventh-ranked and undefeated Indians (10-0). The right-handed hurler not only went 4-0 with a 0.25 ERA and three shutouts, but she reached the 1,000-strikeout plateau on Sunday, Feb. 21 in the sixth inning of a one-hit shutout against Columbus State. In that contest, she took a perfect game into the seventh and finished with seven punchouts.

“I know that reaching 1,000 strikeouts is a huge accomplishment and this may sound cliché, but it’s true, I never would have come close to this goal if it wasn’t for the amazing catchers and coaching staff we have calling pitches,” said Tysinger. “I have complete trust in my teammates on the field and in the batter’s box to get the job done day in and day out.”

In her first three starts, Tysinger went the distance with 10 strikeouts per contest, two shutouts and an upset win over then-No. 9 Georgia College. Against the Bobcats, Tysinger allowed just three hits, an earned run and did not issue a free pass in a 3-2 triumph. The South Atlantic Conference Pitcher of the Week twirled five and four-hit shutouts in her other two starts. For the week, she punched out 37 batters, walked just three and held her opponents to a .138 batting average.

“For Catawba, it’s an incredible accomplishment,” said head coach Nan Whitley. “Carley is a very focused, hard working and dedicated student-athlete.  She is definitely a team player despite all the individual accolades she has received.”