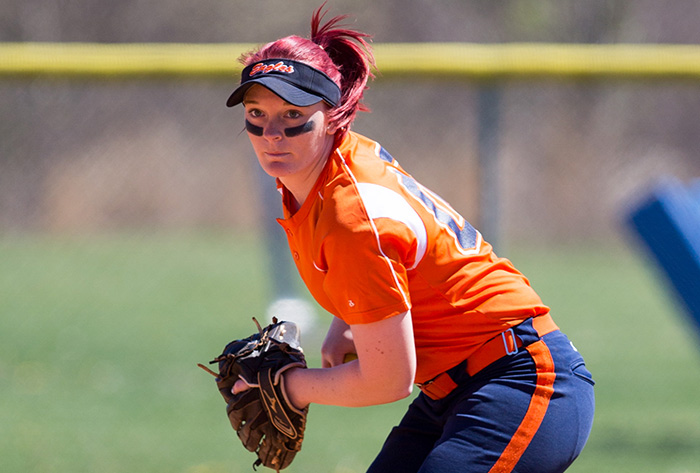 INDIANAPOLIS – Former Carson-Newman softball second baseman Elayna Siebert (Knoxville, Tenn.) has been named to the final nine for the NCAA's Woman of the Year award.

The NCAA Woman of the Year selection committee announced Siebert and 29 other honorees as  finalists for the award on Sept. 7 before trimming the list down to nine, three from each division, Wednesday.

A record 517 school nominees were submitted this year, which was whittled down to 142 conference nominees. The committee selected 30 women from that pool – 10 from each of the three NCAA divisions – representing 13 sports and a host of undergraduate majors, including biology, accounting, criminal justice, education, engineering and computer science.

From the nine finalists, the NCAA Committee on Women's Athletics will select the 2016 Woman of the Year, who will be announced Oct. 16 at a ceremony in Indianapolis.

"This is an amazing opportunity and very unexpected," Siebert said. "It's very meaningful for me to be given the chance to represent my sport and my school in this way. I'm so appreciative to the support system I have around me, and I'm excited to be considered for such an incredible honor."

Siebert, who now serves as a graduate assistant coach at Auburn, was also named the South Atlantic Conference's Woman of the Year.  The Knoxville, Tenn.-native is a two-time first team CoSIDA Academic All-America selection.

Siebert (Knoxville, Tenn.) became the fifth Carson-Newman honoree for the league's scholar athlete award and the first for the program since Haley Allen won it in 2004 in mid-May.  C-N's first four honorees came in-a-row from 2001 to 2004, with Marci Mitchell (now Whiteside) winning three straight from 2001-03.

"She was always one of those well-rounded individuals, and that doesn't do her justice," Kazee-Hollifield said. "From the passion she has for people, to her passion for excellence in everything she does, she always wants to do things right.  She maximizes everything to the fullest potential.  I'm so proud of her for what she did for Carson-Newman softball, Carson-Newman University and for what she will do at Auburn and beyond."

Siebert tallied a .383 average to lead the Eagles in her final season. As a senior, she had 36 RBI, four dingers and four triples in her senior season.  The 36 runs batted in rank ninth in the league while the four triples were the fourth highest total in the conference.

The Karns High School graduate collected the fourth, four-hit day of her career against Bluefield State, coming a home run shy of the cycle that day.  She matched her own school record for doubles in a single game when she connected on three in April against Wingate.

"It's not something I was specifically striving for, I was only trying to perform well on the field and the classroom," Siebert said. "But it's very nice to be recognized for this as a byproduct of that performance.  Coach always made it a priority to keep our grades up. So it was nice to have that support from her."

Siebert graduated from Carson-Newman with a 3.97 GPA as an accounting major.  A four-time Dean's List honoree, she earned Eagle Scholar honors during her sophomore, junior and senior years.  Additionally, she was presented with the university's Academic Athlete of the Year at the third annual Frosty Awards in early May as the athlete graduating with the highest grade point average.

"Elayna is such a competitor, and always had it in her to make sure business was taken care of on the field as well as off it," Kazee-Hollifield said.  "She cared equally about her performance on the field of competition as well as what happened in the classroom."

Siebert was a four-time Carson-Newman Hope Scholar and Carson-Newman Presidential Scholar.  Siebert was also named to the South Atlantic Conference Commissioner's honor roll all four years at Carson-Newman.  She is a member of the Alpha Chi Honor Society and was named a CoSIDA Academic All-American as a junior and won the honor again as a senior.

A three-time All-SAC selection and all-region selection, Siebert was named a first-team All-American as a utility player during her junior year. Siebert finished her career with 115 RBI, 22 home runs, 31 doubles and a .365 average at the plate.  She is tied for eighth all-time in SAC history with 14 triples; she slugged .572 for her career.

Siebert was very generous with her time during her college career as she sponsored a child in Bangladesh all four years as an Eagle volunteering and providing funds to help a child receive a Christian education.  She has been an active volunteer with Compassion International and has worked with the Knoxville Area Rescue Ministries in each of the last three years.  Siebert spent time in Cape Town South Africa with the Living Hope Organization and has been a guest speaker at the Vonore Baptist Church during their summer youth revivals.

She is also a coach of a summer travel softball team and volunteers as a coach during Carson-Newman's summer softball camps.