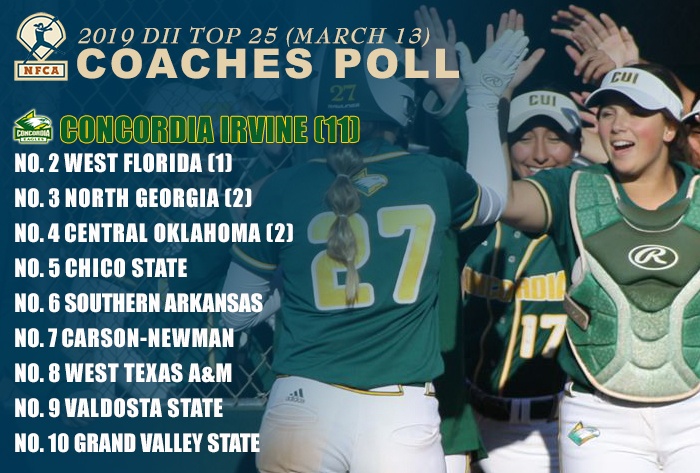 LOUISVILLE, Ky. – Concordia Irvine joined the revolving door of No. 1 teams in the 2019 NFCA Division II Top 25 Coaches Poll. The Eagles (15-1) rise to the poll’s top spot for the first time in program history and are the fifth different No. 1 team this season, one more than all of the 2018.

West Florida remained at No. 2 splitting a pair of contests against nationally-ranked foes. The Argos (22-2) had their 17-game winning streak snapped at then-No. 4 North Georgia, 2-0, but bounced back with a 3-0 triumph over then-No. 21 Wingate.

The NightHawks (20-6) come in at No. 3, going 3-1 last week with home wins over Palm Beach Atlantic, Wingate and West Florida. Central Oklahoma has rattled off 16-straight wins and continues to move up the polls, rising four more spots to No. 4. The Bronchos (20-1) swept Northwest Missouri State in a four-game Great American Conference (GAC) series, outscoring the Bearcats, 37-9, which included a season-high 17 runs in game one.

Idle Carson-Newman (13-0), the only undefeated team in the Top 25, remained at No. 7. West Texas A&M inched up one position to No. 8. Valdosta State fell four spots to No. 9 following a 3-2 week that included wins over Union and Georgia Southwestern and two defeats at the hands of new-No. 23 Mississippi College.

No. 10 Grand Valley State enters the top 10 after a 9-1 spring break trip to Florida. The Lakers’ (14-2) pitching staff posted four shutouts and allowed just one run in four other contests.

The 2019 NFCA Division II Top 25 Poll is voted on by 16 NCAA Division II head coaches with two representing each of the eight NCAA regions. Records reflect games played through March 10, 2019.