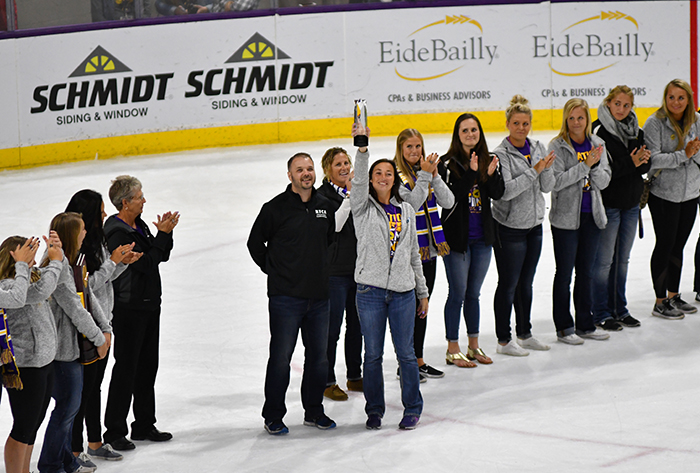 NFCA Division II liaison Brian Stanley was on hand to present Ries with the Player of the Year trophy as the team was recognized during the first period intermission of Minnesota State’s men’s hockey opener against St. Cloud State. Additionally, the Mavericks held a ring ceremony at a morning brunch celebration in the MSU dining hall and were honored at halftime of MSU’s football contest against Augustana.

In helping the Mavericks to a 2017 title, Ries finished the NCAA Championships sporting a 5-0 record and a 1.20 ERA. Ries also struck out 50 batters in 35 innings.

Ries also excelled in the classroom as she received CoSIDA Academic All-American First Team honors and was named D2CCA Central Region Scholar Athlete of the Year, while fashioning a 3.70 grade point average in mass media.

Finishing with a school-record 64-7 mark, the Mavericks posted a 10-1 NCAA postseason mark, including 5-0 during the NCAA Championships. The North Sun Intercollegiate Conference regular season and tournament champions hit .326 with 46 hits, 28 runs scored, while posting an 1.20 ERA and 50 strikeouts, leading all squads at the championships.