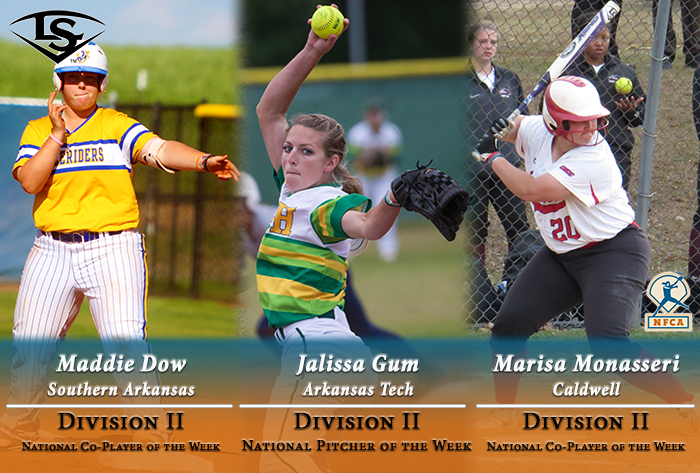 LOUISVILLE, Ky. –  Southern Arkansas’ Maddie Dow and Caldwell’s Marisa Monasseri were namedLouisville Slugger / NFCA Division II National Player of the Week, while Arkansas Tech’s Jalissa Gum was selected the national pitcher of the week. In the final award selection of the season, all three recipients were honored for games played for the week of April 24-30. It’s the second career accolade for Monasseri and Gum and the first for Dow.

Dow did not have much of a chance to swing the bat, but took advantage of it when she did. Even though she was walked 11 times, she hit .636 (7-for-11) with two doubles and six runs scored. Her walks and one hit-by-pitch led to an impressive .826 on-base percentage. In a four-game sweep of Southeastern Oklahoma, the senior first baseman was 6-for-6 with two doubles, six runs, eight walks for a perfect 1.000 on-base percentage. The Bonham, Texas native is third all-time in Division II with 169 career walks and is the NCAA Division II active home run leader with 72.

Over an eight-game stretch, Monaserri hit .619 (13-for-22) with three doubles, three home runs and 12 RBI, helping the Cougars post a 6-2 mark in the final week of the regular season. In a sweep of Dominican that secured the Central Atlantic Collegiate Conference regular season title, she clocked two homers and drove in five runs. Monaserri, a native of Monroe, N.J. capped off the week with a 5-for-7 outing with four RBI and a pair of doubles in a sweep over Queens College. For the week, she was perfect defensively handling 38 chances without a miscue, while posting a .704 on-base and 1.190 slugging percentage. Additionally, Monaserri was took home CACC and ECAC Player of the Week plaudits.

Gum took the team on her shoulders last week as she logged five complete-game victories (three shutouts) for the Golden Suns, which included a pair of wins at then-No. 14 Southern Arkansas to earn a Great American Conference (GAC) series split. The senior hurler struck out 58 batters, surrendered three runs, two earned, and scattered 18 hits over 35 innings of work. Gum opened the week with three-hit shutout of the Muleruders in which she fanned 14 and in the night cap went the distance, allowing two runs on seven hits. Over the weekend, she celebrated her final home games in style with a pair of shutouts on April 28, including a one-hit 20-strikeout performance in game one versus Southwestern Oklahoma State. She became just the fourth DII pitcher to fan 20 in a seven-inning contest. In the nightcap, Gum sat down 15 more Bulldogs in a three-hit shutout. For the week, she posted a 0.40 ERA and helped herself out at the plate with four hits, a double, two RBI and four runs scored.