LOUISVILLE, Ky. – Eight finalists have been selected for the 2017 Schutt Sports / NFCA Division II National Freshman of the Year. There is one finalist from each of the eight regions and the winner will be announced on Wednesday, May 24 at the NCAA Division II Softball Championship Banquet in Salem, Va.

Burton led the Wildcats and finished second the Central Atlantic Collegiate Conference (CACC) with a .463 batting average, while also pacing the league with 88 hits, 57 runs scored and 41 stolen bases, which is a single-season program record and ranks 10th in the NCAA. The CACC Freshman of the Year owns a .500 on-base percentage with 12 doubles, seven triples, which are tied for 10th in the NCAA, and a homer for a .616 slugging percentage.

Humes helped the second-ranked Bisons both in the circle and at the plate, helping Harding to the Super Regionals in its first ever NCAA Tournament. The rookie hurler, who twirled a no-hitter to open the regionals, leads the Great American Conference (GAC) with a 33-1 mark, 1.10 ERA, 16 shutouts and six saves, while fanning 277 batters and holding opponents to a .169 average. Offensively, the GAC Freshman of the Year is batting .345 with 10 doubles, seven homers and 53 RBI.

In her rookie season, Leonhardt owns a 27-2 mark, setting the single-season school record for wins. She currently sports and 1.49 ERA with 10 shutouts and 179 strikeouts in 202.1 innings of work. The Great Lakes Valley Conference Freshman of the Year has held her opponents to a .201 batting average.

Lloyd, the PacWest Player and Freshman of the Year, put together a stellar rookie campaign with a .424 batting average, 67 hits, 19 doubles, which rank 14th in the NCAA, five triples and nine long balls. She slugged .778, scored 41 runs and drove in 51, while adding a strong defensive component to her game, committing just one error in the outfield.

Smith led the Peach Belt Conference (PBC) with a 31-5 record, 1.18 ERA and 247 strikeouts, while posting eight shutouts, three saves and holding her opponents to a .180 batting average. The Suwanee, Ga. native garnered first-team All-Peach Belt honors and was named MVP of the PBC Tournament.

Torres hit .412 in her first collegiate season with 21 doubles, which is tied for fifth in Division II, nine homers, 45 runs scored and 58 RBI. Her average, home runs, slugging percentage and RBI ranked second on the squad, while Torres was third in runs scored (45) and hits (61). The Rocky Mountain Athletic Conference Freshman of the Year slugged .789 and registered a team-best .494 on-base percentage.

The award was created in 2015 to honor the outstanding athletic achievement among freshmen softball student-athletes throughout Division II. Dixie State’s Janessa Basset was the inaugural recipient and Colorado Christian’s Charlotte Romero earned the honor in 2016. 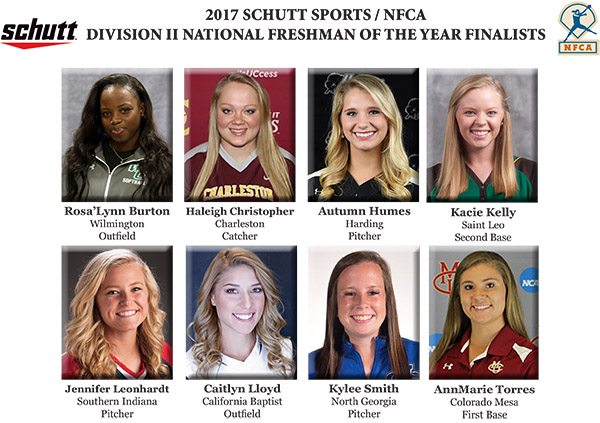