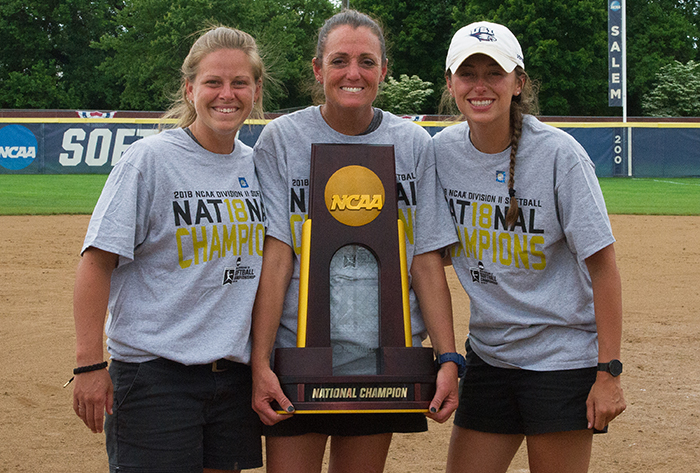 LOUISVILLE, Ky. – National champion University of Southern Indiana was voted by its peers as the NFCA’s 2018 NCAA Division II National Coaching Staff of the Year, announced the Association on Wednesday afternoon.

Head coach Sue Kunkle, assistant coach MacKenzi Dorsam, graduate assistant Lexi Reese and volunteer assistant Brooke Harmening guided the Screaming Eagles (41-23) to their first national title and the first for a women’s program at Southern Indiana. As the No. 8 seed, USI posted a perfect 5-0 mark in Salem, Va. On the way to the title, the Screaming Eagles knocked off No. 1 North Georgia to open the tournament and swept No. 2 Saint Anselm in the championship series.

They went 5-1 during regional and super regional play, all on the road, and finished 14-1 in the postseason, including four wins at the Great Lakes Valley Conference (GLVC) Tournament. As the GLVC’s six seed, USI captured its first tournament title under Kunkle and first since 1998. In postseason play, including the GLVC tournament, the pitching staff recorded eight shutouts and three more contests with just one run allowed.

Kunkle, who finished her 17th season at the helm of the softball program, earned her 500th win with a 4-0 victory over Indianapolis on day one of the GLVC tournament. She has guided USI to four straight NCAA Division II tournaments and the last two championships.