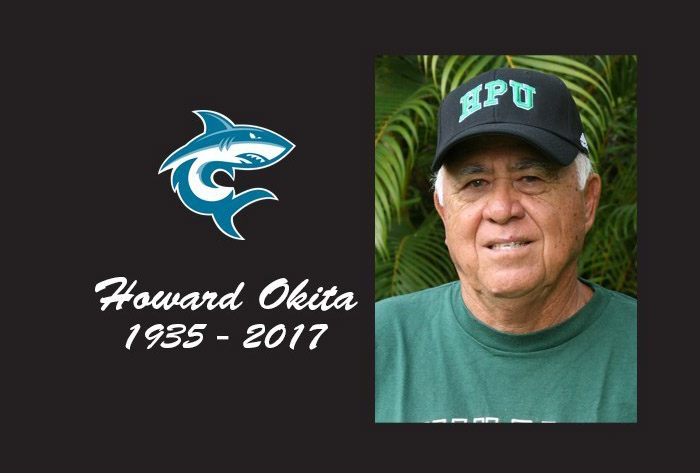 died on June 2 after a sudden and brief battle with leukemia. Okita was 81.

. "He has done so much for the HPU Ohana and for softball on Oahu and the state of Hawai'i. He was a true gentleman and great ambassador for HPU. His passing is a terrible loss and our hearts and prayers go out to his family."

A Celebration of Life for Okita has been set for Wednesday, June 28.

The service is set for Noon at Howard A. Okita Field on the HPU Hawai'i Loa Campus in Kaneohe. The family requests donations to the HPU Softball program in lieu of flowers.

The service is open to the public and all touched by Coach "O" are encouraged to attend.

Okita started the softball program at Hawai'i Loa, leading it to a 125-65 record in five seasons including the 1991 NAIA National Championship. He was named the NAIA Coach of the Year. When HLC merged with HPU after the 1992 season, Okita joined the then Sea Warriors as an assistant for the 1993 campaign. He was named head coach for the 1994 season.

Okita stepped down as head coach following the 2008 season with an HPU mark of 505-211-3, helping HPU to PacWest Championships in 2009, 2010 and 2011, along with the 2010 NCAA Division II National Championship. He remained an assistant coach through the 2013 season when he retired to a volunteer coaching role.

The HPU softball field, which he help build in 1994, was renamed Howard A. Okita Field in 2009 for his service to the university.

"Howard had a vision to build a 'field of dreams' without the thought of it being named after him," said HPU head coach Bryan Nakasone

, who coached alongside Okita since 1993, became co-head coach with Okita in 2002 and succeeded him as head coach in 2009. "His dream was not only grass and dirt, but it was all the players. And to get them to dream big and work hard to see it through."

But retired could be a loose term, as Okita was known for spending hours working on "his" field, helping schedule non-conference games for the Sharks and working with the players during the season.

Okita was individually inducted into the HPU Athletic Hall of Fame in 2012, and was part of the class of 2017 when his 1991 HLC National Champion Softball Team was inducted.

"There is a tremendous void in the softball ohana without Coach O.," said Nakasone. "All my Aloha my friend."

Okita is survived by his loving wife Nina Okita, his daughters Renee Kiyabu, Donna Okita and Wanda Okita, along with his grandchildren and great-grandchildren, his sister Sheila Murakami,and brothers Denis Okita and Lew Morris.