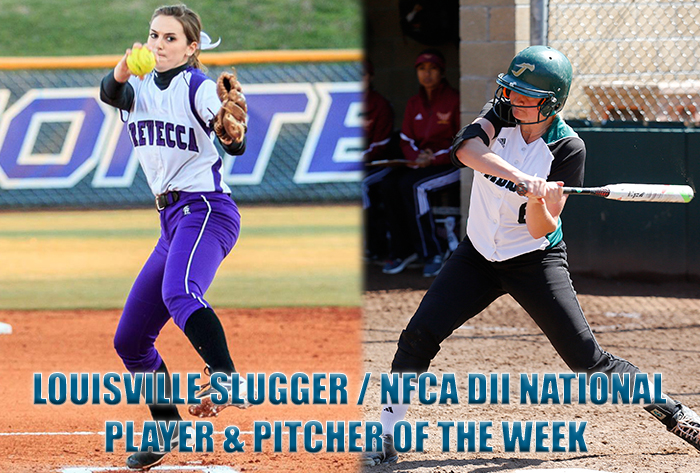 Holland, a sophomore from Oakdale, Calif., was a force to be reckoned with at the plate and on the base paths for the third-ranked Jacks. Along with her .625 (20-for-32) batting average, she recorded eight multi-hit contests with three doubles, 11 RBI and nine runs scored. Holland, who is second in the nation in stolen base per game, showed off her speed as she swiped 19 bases in 19 attempts to bring her season total to 48. In addition, she is riding conference bests with a 26-game hitting streak and has reaching base safely over her last 38 contests.

"This is really exciting," said Holland. "I feel very honored, but I know I couldn't do it without my teammates and coaches."

Named the Tournament of Champions MVP, Holland stole a tournament record 16 bases and hit .652 with five RBI and eight runs over an undefeated six-game stretch. For the week, the lightning quick outfielder twice recorded four thefts and registered four three-hit contests. Holland went 3-for-4 with a double and four RBI in game two of a doubleheader against UC San Diego and capped off her week with a 3-for-3 effort against Montana State-Billings. Against the Yellowjackets, she knocked in three, scored three times and stole four bases.

“Hanna worked really hard to improve her game in the offseason, and that work is paying off,” said Head Coach Shelli Sarchett. “She is a talented player and student of the game. Her ability to steal bases isn’t just about speed; it is about her understanding of the game situation and opponent. We are proud of her accomplishments so far and know that she is an important part of our team’s success.”

Shouldering the workload for the Trojans in a four-game sweep of Cedarville, Fagan did not allow a run and struck out 40 in 27 innings of work. The Cornersville, Tenn. native started off with a bang, no-hitting the Yellow Jackets in the series opener with 11 strikeouts and three walks for her fourth no-no of the season. She closed out the four-game Great Midwest Athletic Conference (G-MAC) set with one-hit masterpiece, fanning a week-high 13 batters.

"Cedarville is who we played in the G-MAC championship last year, so I knew going in they were a good team,” said Fagan. “I honestly want to give all the credit to my catcher Jordan Griner. She calls the games herself and reads batters so well. She makes me the confident pitcher I am. The defense behind me always makes plays, and I am fully confident in them. "

Fagan added a four-hit shutout with 11 Ks prior to her one-hitter and tossed six scoreless innings in game two of series in which she surrendered one hit and two walks with five strikeouts. The right-hander scattered six hits over her 27 innings of work, holding her opponents to a .069 batting average.

"Haley had a good weekend,” head coach Ben Tyree said. “We knew these were big conference games so I told her, 'Take the ball and see what you can do' and she did just that. She really stepped up and stepped up her leadership to take over the whole series. It was her time."