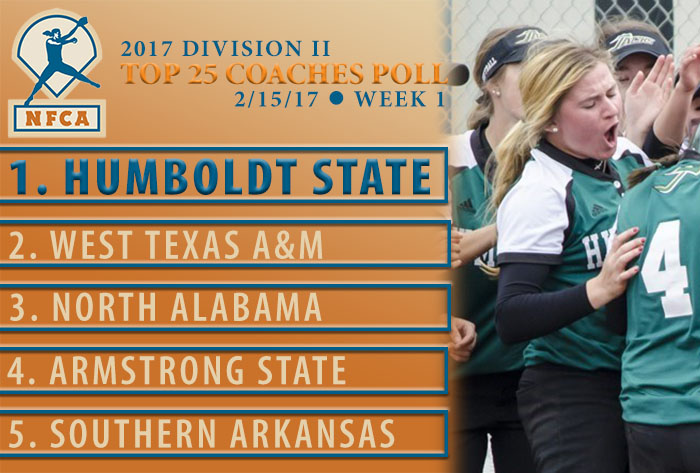 LOUISVILLE, Ky. - Behind a 5-0 start at the Desert Stinger Classic, Humboldt State jumped to No. 1 in the first 2017 NFCA Division II Top 25 Coaches Poll of the regular season, announced the Association on Wednesday morning.

The Jacks’ move to No. 1 marks the first time in the top position since the 2014 Week 1 poll (Feb. 19). Humboldt State received nine first-place votes and 392 points. It swept through its Desert Stinger Classic in dominant fashion, outscoring the opposition, 55-10. The Jacks posted four run-rule victories over Western New Mexico (12-1), University of Mary (10-2), New Mexico Highlands (17-5) and Augustana (10-1), while defeating Minot State, 6-1, to complete the perfect weekend.

West Texas A&M, who earned five first-place votes and 385 points, charged out of the gates with an 11-0 start and jumped two spots to No. 2. The Lady Buffs also posted a 5-0 mark at the Desert Stinger, which included a win over then-No. 18 California Baptist (8-3). West Texas A&M followed with an impressive 6-0 showing at its WT Invitational, recording five shutouts and outscoring the opposition, 54-3.

Falling two spots to No. 3 is preseason No. 1 North Alabama. The Lions grabbed two first-place votes and totaled 370 points. UNA (8-2) opened at the Gulf Coast Invitational with a 4-2 mark, which included a win over then-No. 22 UMSL, 1-0 in eight innings. The Lions picked up four victories, one against then-No. 16 Indianapolis (5-4), at the Montevallo Falcon Frenzy.

Following a 4-1 start to the season at the Florida Tech Marriott First Pitch, Armstrong State dropped a spot to No. 4. The Pirates knocked off the host Panthers, 11-7, and also picked up wins over Nova Southeastern (6-3 / 10-3) and Palm Beach Atlantic (6-5), while dropping a 4-1 decision to Angelo State.

No. 5 Southern Arkansas is off to a 7-1 start after 4-0 and 3-1 outings at the SAU Softball and Lubbock Christian Tournaments, respectively. No. 6 Grand Valley State, No. 7 Adelphi and No. 9 Charleston were idle. North Georgia comes in at No. 8 at 10-2 start. The Nighthawks opened with a 4-2 showing at the Gulf Coast Invitational and followed with a perfect 6-0 mark at its Steak ‘N Shake Classic.

The NFCA Division II Top 25 Poll is voted on by 16 NCAA Division II head coaches with two representing each of the eight NCAA regions. Records reflect games played through Feb. 12, 2017.