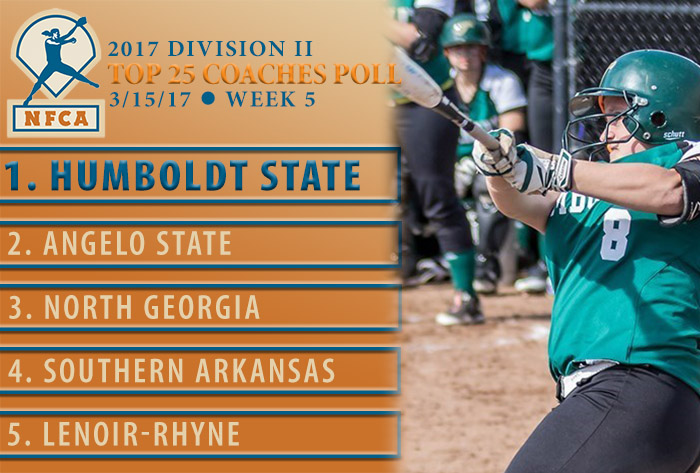 LOUISVILLE, Ky. – Powered by an 8-0 week, Humboldt State is ranked No. 1 in the NFCA Division II Top 25 Coaches Poll for the fifth straight week. The top five also saw movement as a streaking Angelo State continued its rise up the poll to No. 2, while an equally red-hot Lenoir-Rhyne came in at No. 5.

The Jacks (20-1) reached the 20-win plateau after picking up six California Collegiate Athletic Association (CCAA) road wins over Cal State East Bay and Cal State Dominguez Hill before wrapping up the week with a pair of 3-1 triumphs over Dominican in their first home games of the season. HSU received 15 first-place votes and 399 points.

The Rambelles (24-1), picking up the final first-place vote and 367 points, continued to roll and knock off top-ranked teams by starting the week with a doubleheader sweep of then-No. 3 St. Mary’s (5-1, 10-0). They continued with a three-game Lone Star series sweep at Eastern New Mexico with 4-3, 23-8 and 5-0 victories. Moving up six more spots, Angelo’s game three victory over the Greyhounds extended its winning streak to 20 games, matching a program record that was achieved in 2003 and 2004.

Inching up one spot to No. 3 is North Georgia (363 points). The Nighthawks (22-6) had a light week due to inclement weather, picking up a Peach Belt win over Montevallo, 6-0. Southern Arkansas (347) fell to No. 4  after splitting a Great American Conference home doubleheader with Southern Nazarene (3-5, 10-1).

Also dropping one position each in the poll were No. 6 Valdosta State and No. 7 Chico State. The Blazers (21-6) fell in a three-game Gulf South series at Shorter (0-10, 5-6, 8-6), while the Wildcats (15-2) lost their opening CCAA game to Stanislaus State before rebounding with three victories to take the series.

Central Oklahoma swept a MIAA twinbill from Washburn to stay put at No. 9 and Southern Indiana climbed six spots to No. 10 after completing an 8-0 week at the PFX Spring Games. Improving to 17-3, the Eagles posted four shutouts in Clermont, including a 5-0 triumph over then-No. 7 Grand Valley State.