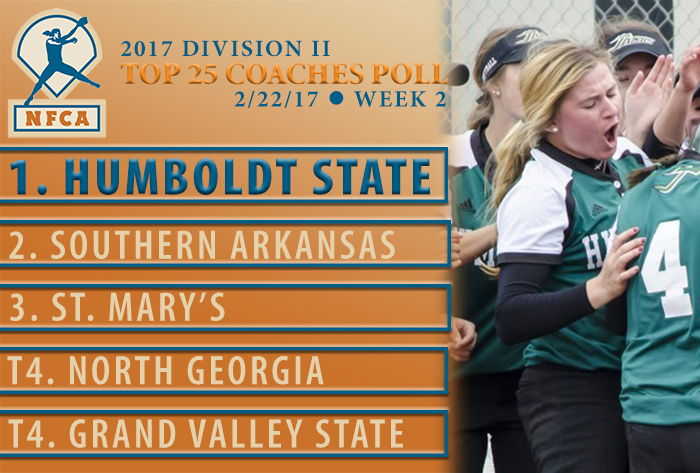 LOUISVILLE, Ky. – With all the shuffling there was one constant, Humboldt State, in this week’s 2017 NFCA Division II Top 25 Coaches Poll, announced the Association on Wednesday morning. The idle Jacks were voted the unanimous No. 1 team, while the other 24 positions saw significant movement.

Hampered by the severe weather in Northern California, the idle Jacks’ (5-0), located 100 miles north of San Francisco in the city of Arcata, have not seen the field since Feb. 5 due to the heavy rains plaguing the area. HSU will attempt to get back out on the field on Feb. 24-25 at San Francisco State.

With some defeats handed to top five teams, Southern Arkansas, St. Mary’s, North Georgia and Grand Valley State made up a new top 5, with the latter four earning their way in for the first time this season. Also, No. 6 Valdosta State, No. 8 Saint Leo and No. 10 Chico State moved into the top-10.

Making the biggest move is St. Mary’s, jumping seven spots to No. 3. The Rattlers (14-2) opened their home schedule in fine fashion, sweeping through their opposition of their Rattler Invitational, including a win over then-No. 12 Central Oklahoma (5-1). They also defeated South Central Region foes, Metro State (3-2, 5-2) and St. Edwards (3-0, 6-1).

North Georgia and Grand Valley State tied for fourth. The Nighthawks (14-4) bounced back from a pair of defeats to Shorter (3-4, 1-4) with four convincing wins over Shepherd (9-1, 8-0) and Seton Hill (12-4, 20-4). The Lakers open their 2017 season this weekend at the Lewis Flyers D-2 Midwest Region Dome Invitational in Rosemont, Ill. Grand Valley will take on Missouri S&T, Illinois Springfield, Wisconsin-Parkside and William Jewell.

Catapulting five spots into the sixth position is Valdosta State. The Blazers (12-2) outscored their opponents 73-7 in five wins last week as they extended their winning streak to eight games. West Texas A&M fell from No. 2 to No. 7 after a 3-2 week at the Cactus Classic in Tucson, Ariz. The Lady Buffs (14-2) opened with three wins over University of Mary (11-8), Lincoln Memorial (1-0) and Academy of Art (9-5) before dropping two contests to then-No. 23 Dixie State (4-8, 6-7).