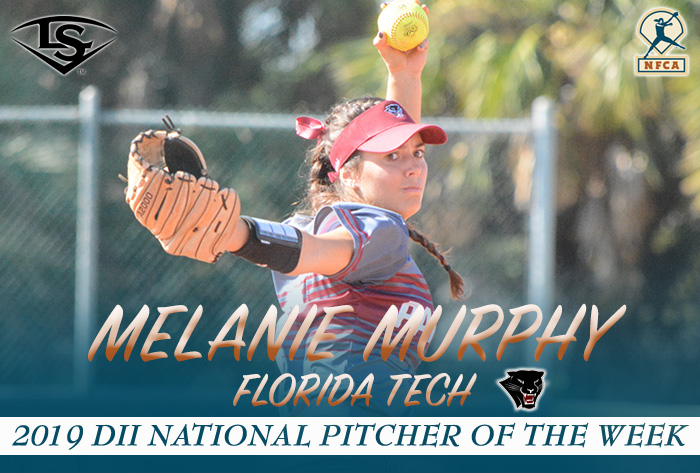 LOUISVILLE, Ky. – Augustana’s Maggie Kadrlik and Florida Tech’s Melanie Murphy were named the final Louisville/Slugger NFCA Division II National Player and Pitcher of the Week honorees for 2019. The dueo was recognized for their outstanding play during the week of April 22-28.

Kadrlik hit an amazing .850 (17-for-20) with six home runs and 13 RBI to help the 16th-ranked Vikings post a 5-1 mark in the final week of the regular season. Slugging 1.800 over six games, the Inver Grove Heights, Minn. native also doubled twice, scored eight runs and did not strike out in 21 plate appearances. She homered in five contests, which included two in the nightcap at Minnesota-Crookston. In the doubleheader against the Golden Eagles, Kadrlik was 7-for-7 with a double, three long balls, six RBI and three runs scored.

The Northern Sun Intercollegiate Conference Player of the Week registered three hits with one homer in each of their matchups with Upper Iowa. Against the Peacocks, she drove in three runs in game one and two more in game two. Kadrlik capped off the week with four more hits at Bemidji State. She doubled, homered and drove in two runs in the opener.

Murphy tossed 14.2 innings of shutout ball and picked up three wins, keying Florida Tech to a sweep of Eckerd. The three wins secured the fourth-ranked Panthers their first-ever Sunshine State Conference title, which earned them the league’s automatic qualifier to the NCAA Division Tournament. The senior southpaw twirled a pair of shutouts with 12 strikeouts and one walk. She surrendered just five hits, holding her opposition to a .104 batting average.

Murphy opened the series with a three-hit shutout, fanning six Tritons and hitting a batter. In the nightcap, she entered with one out, a runner on second and the score deadlocked at 0-0 in the top of the seventh. She retired the next two batters on two pitches to get out of the jam. The Sunshine State Conference Pitcher of the Week took to the circle the following day and held the Tritons to two hits and struck out six in a 5-0 victory.