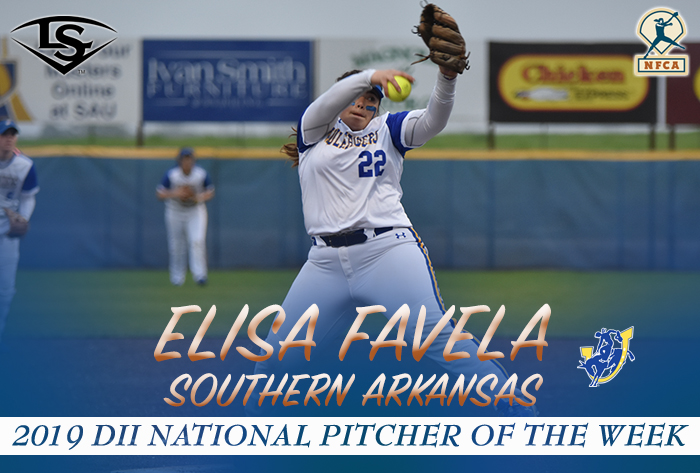 Collins, who hails from Apison, Tenn., had a monstrous doubleheader against Lincoln Memorial. The senior catcher cranked four home runs, including three in game two of the Trojan’s sweep. In the nightcap, Collins launched a pair of grand slams and a solo shot which attributed to her single-game Great Midwest Conference-record nine RBI. She also broke a 3-3 deadlock in game one with a two-run shot giving her 11 RBI over two games. In three games last week, Collins hit .600 scored four runs and slugged 1.800.

Favela twirled back-to-back no-hitters against Northwestern Oklahoma State and finished the week 3-0 with a 0.00 ERA and 18 strikeouts. The junior righty surrendered an unearned run and three hits over 15 innings of work, holding her opposition to a .058 batting average. Favela fanned 10 and hit one batter in her first no-no. She stepped in the circle the next day and fanned six more Rangers and walked three over five innings to become the third SAU hurler to throw a no-hitter.

In her first appearance of the week, Favela picked up a win in relief at Harding. She struck out three and scattered three hits over the final three frames in a 3-2 eight-inning win. The Great American Conference Player and Pitcher of the Week also helped herself out offensively, hitting .667 (8-for-12) with two doubles, a home run, six RBI and four runs scored.