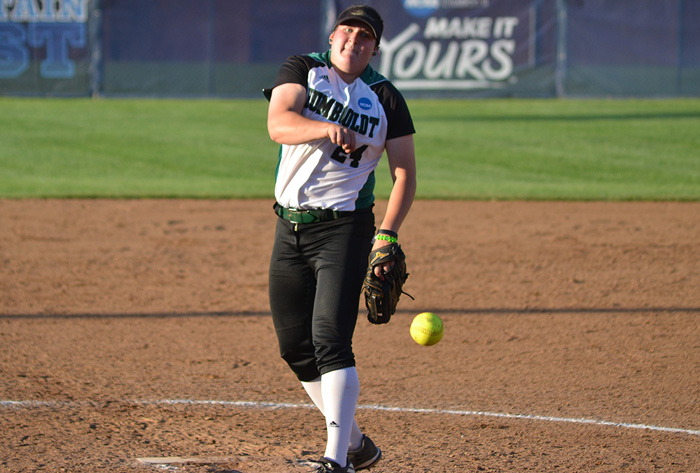 The day started with a near four-hour marathon and was capped off by a three-run seventh inning rally with a no-hitter by Humboldt State’s Madison Williams sandwiched in between.

The third day kicks off with two elimination games for the right to face off against the previously mentioned programs in the semifinals. Armstrong State and Humboldt State open at 11:00 a.m. for the right to take on Angelo State, followed by West Virginia Wesleyan and West Florida for a chance to meet up with Minnesota State.

Southern Indiana’s and Molloy’s seasons come to an end.

Angelo State and West Virginia Wesleyan clashed in a 12-inning marathon game that lasted nearly four hours. The Rambelles were able to push across a run in the top of the 12th and recorded a 1-2-3 bottom half to secure a 6-5 win over the Bobcats (50-9) in a wild day two opener.

In the 12th, Kennedy Urbany and Courtney Barnhill led off with back-to-back singles. Taegan Kirk sent a ball to the right center gap and two WVWC outfielders collided allowing the ball to drop. Urbany scored from second with the go-ahead run.

Morgan Hill (9-0), who entered in the bottom of the seventh with runners on first and second, closed out the game and secured the win in the bottom half of the inning. Earning her ninth victory, she tossed 5.1 innings, struck out three and scattered three hits.

The Bobcats carried a 2-0 lead into the sixth, which included a Morgan Bruce solo homer and five innings of shutout ball from Hannah Vet. The Rambelles scored three in the top half to take their first lead and tack on a run in the seventh. However, WVWC forced extras when a misplayed fly ball allowed two runs to score.

The teams traded runs in the ninth.

A five-run fifth was the difference as Minnesota State topped Armstrong State, 8-4, in the second winner’s bracket game on day two.

With the scored knotted 1-1, the Mavericks erupted for five runs in the fifth, the first run courtesy of a Ashley Thell RBI single back up the middle. A throwing error allowed two more Minnesota State runs to cross the plate. The rally was capped off by a two-run double to left by Carly Esselman.

The Pirates (37-13) responded in the bottom of the sixth making it a two-run game. Katie Collings cut the lead to 6-4 with a three-run shot down the line in left. The Mavericks tacked on two insurance runs in the top of the seventh for the final margin of victory.

Coley Ries went the distance to improve to 38-3 on the season. She fanned 10 moving her single-season total to 443, surpassing the school record of 434 she set last season. Tori Bates (6-2) suffered the loss in 4.1 innings of work. Jane Trzaska entered in the fifth and closed the final 2.1 innings with two strikeouts.

Madison Williams (pictured top)  bounced back from a tough first start and twirled a no-hitter helping Humboldt State satay alive with a 2-0 victory over Molloy in the first elimination game of the Championships. The senior hurler struck out 10 and walked two to improve to 25-10 on the year.

A sac fly by Sydney Roberts put the Jacks on the board in the third and Breonna Bejaran added the second run with a leadoff homer in the fourth. It was Bejaran’s team-leading 13th of the season.

Hawkes suffered the defeat, allowing an earned run on seven hits. She struck out six and walk one, falling to 20-13.

Heading into the seventh, the Argos had been held to just four hits by Southern Indiana's Jennifer Leonhardt. However, they doubled that total and along with a walk were able to push across the three runs. Two batters prior to Steele’s go-ahead base knock, Cailan Taylor drove in the first run of the inning with a RBI single.

Sarah Maloney, who entered after a leadoff single in the fifth, picked up the win with three innings of shutout relief. She struck out two, did not walk a batter and surrendered two hits. She slammed the door on the win with a 1-2-3 seventh.

West Florida took a 1-0 lead in the third, but Southern Indiana answered with a three-run fourth to grab a 3-1 lead. During the frame, Olivia Clark-Kittleson and Mena Fulton recorded RBI single, while Lenhardt knocked in run with a groundout to short.

Meghan Toney and Rachel Wright each had two hits for West Florida. Wright also scored two runs. Fulton finished 2-for-3 with a double. Marleah Fossett was 3-for-4, while Clark-Kittleson registered two hits, including a double.