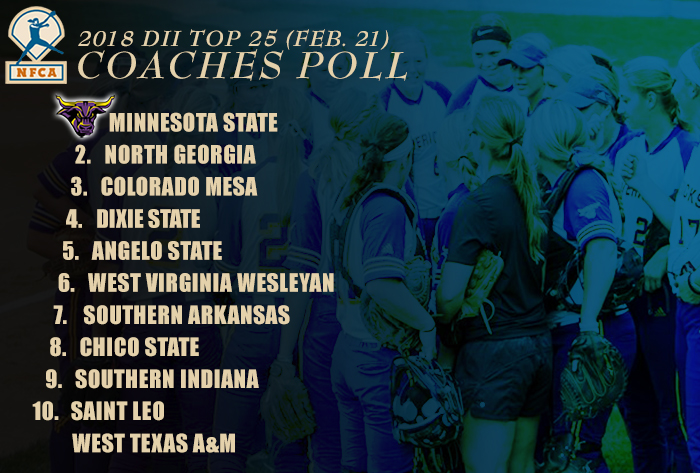 LOUISVILLE, Ky. – Defending national champion Minnesota State opened its season with four wins and remained No. 1 in the 2018 NFCA Division II Top 25 Coaches Poll, announced by the Association on Wednesday. The Mavericks (4-0) garnered 14 of a possible 16 first-place votes and 398 points.

Minnesota State is one of just two programs from the preseason to remain in the same poll position as movement was abound in the top-25. The first regular season poll welcomes eight newcomers, including Concordia Irvine at No. 16. The Eagles (7-2) are in their first full year of NCAA Division II eligibility.

Additionally, No. 8 Chico State and t-No. 10 Saint Leo made the largest jumps inside the Top-25 leapfrogging 13 and 11 spots, respectively. The Wildcats are 13-0 with a Desert Stinger Classic title and an 8-0 mark in California College Athletic Association play, while the Lions (9-3) have posted wins over then-No. 3 West Florida, new-No. 13 North Alabama and then-RV University of Alabama in Huntsville.

Following the cancellation of the UAM 8-State Classic, which left a lot of teams scrambling for games, Minnesota State picked up four contests at Missouri Western. The Mavericks swept pair of doubleheaders from the host Griffons (9-0, 11-7) and Northwest Missouri State (10-0, 7-6).

Rising five spots each to No. 2-4 are North Georgia, Colorado Mesa and Dixie State, respectively. The NightHawks (15-0) gathered the other two first place votes. They swept through three tournaments, which included wins over then-No. 3 West Florida, then-No. 25 Lenoir-Rhyne and North Alabama.

The Mavericks (10-0) caught fire early as they scored 25 runs in their season opener, topped national runner-up and then-No. 2 Angelo State (3-1) and then-No. 22 St. Mary’s (4-3 in 8 inn.) in the opening weekend. The Trailblazers (13-0) have scored double-figure runs in seven contests and swept through two tournament fields.

No. 5 Angelo State fell from the No. 2 position, but has enjoyed a 13-1 start to its season, dropping its lone contest to Colorado Mesa. No. 6 West Virginia Wesleyan does not play until March 3.

Southern Arkansas (9-1) moved from No. 10 to No. 7, winning its first nine games before dropping its final game over last weekend to Emporia State. Preseason-No. 6 Southern Indiana fell to No. 9 after a 3-1 opening weekend, which included triumphs over UAH, Trevecca Nazarene and Delta State.

No. 10 is West Texas A&M rounds out the top-10 as it matches Saint Leo with 249 points.The Lady Buffs (11-1) opened the season with 12 games at the friendly confines of Schaeffer in Canyon, Texas.

Joining North Alabama and Concordia Irvine as newcomers to the poll are No. 17 Palm Beach Atlantic, No. 21 Cameron, No. 22 Merrimack, No. 23 North Greenville, No. 24 UC San Diego and t-25 Texas A&M Commerce.

The 2018 NFCA Division II Top 25 Poll is voted on by 16 NCAA Division II head coaches with two representing each of the eight NCAA regions. Records reflect games played through Feb. 18, 2018.