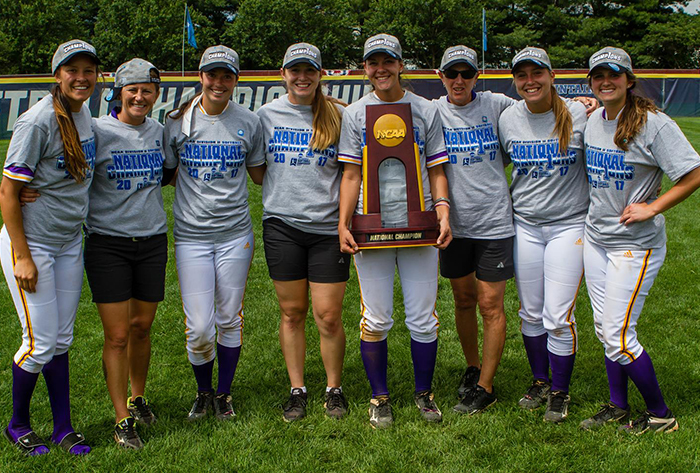 LOUISVILLE, Ky. – National champion Minnesota State was voted by its peers as the NFCA’s 2017 NCAA Division II National Coaching Staff of the Year, announced the Association on Tuesday afternoon.

Head coach Lori Meyer, associate head coach Kristle Wolcott and graduate assistant Sammie Hildreth guided the Mavericks (64-7) to the program’s first national title and the first for MSU athletics since 2008-09. Minnesota State swept through the national championships, posting a perfect 5-0 mark at the Moyer Sports Complex in Salem, Va., including two-game sweep of top-seeded Angelo State in the Championship Series.

Setting a program record for wins, the Mavericks suffered just one defeat in the postseason and finished with a 10-1 record. That lone loss came in game two of a thrilling Central Super Regional against host and regional No. 1 seed Harding University. The series witnessed three one-run contests with each winning run scored in the seventh inning or later

Meyer, who finished her 33rd season at the helm of the softball program, was named Northern Sun Intercollegiate Conference (NSIC) Coach of the Year and led the Mavericks to a 28-2 league mark as well as NSIC regular season and tournament crowns.