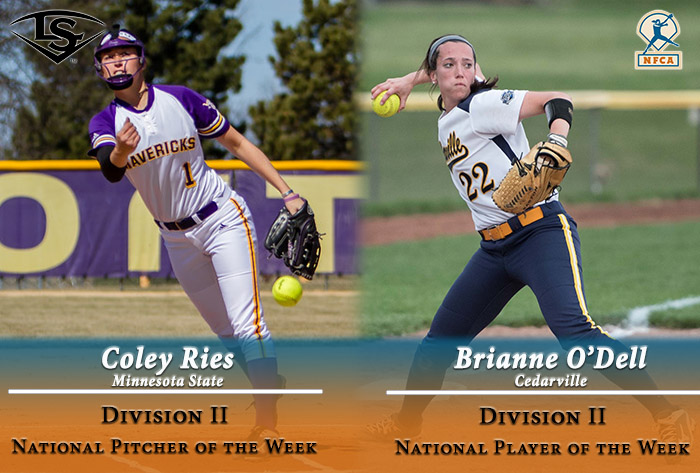 Ries was nearly perfect in three starts, not allowing a base runner over the final 17.1 innings of the week. The right-hander from Eagle Lake, Minn. fanned 44 in 20 innings, did not issue a walk and allowed just two hits for a .032 opponent’s batting average. Those two hits came in the second and third frame of a six-inning shutout over Southwest Minnesota State. She struck out 11 and did not allow a base runner over the final 3.1 innings. Carrying that momentum into the weekend, Ries was perfect in her next two starts against Northern Sun Intercollegiate Athletic Conference foes Northern State and Minnesota State Moorhead. She struck out 15 in a 4-0 triumph over the Wolves and then sat down 18 of 21 Dragons she faced in a 7-0 victory. This marks Ries’ second NFCA weekly honor, earning her first in 2016.

O’Dell extended her hitting streak to 18 games as she recorded at least one hit in all six contests, including a pair of four-hit outings, helping the Yellow Jackets to a 4-2 week. She finished 16-for-21 (.762) with six doubles, a triple, 11 RBI, seven runs and a 1.143 slugging percentage. O’Dell was a perfect 7-for-7 in a mid-week sweep of Ohio Valley, recording four RBI in game one and posting four hits, two doubles and three RBI in the nightcap. In games two and three of a Great Midwest Athletic series against Kentucky Wesleyan, O’Dell was 7-for-8 with three doubles, four runs and three RBI. The Goshen, Ind. native added a triple, RBI and run scored in game one.