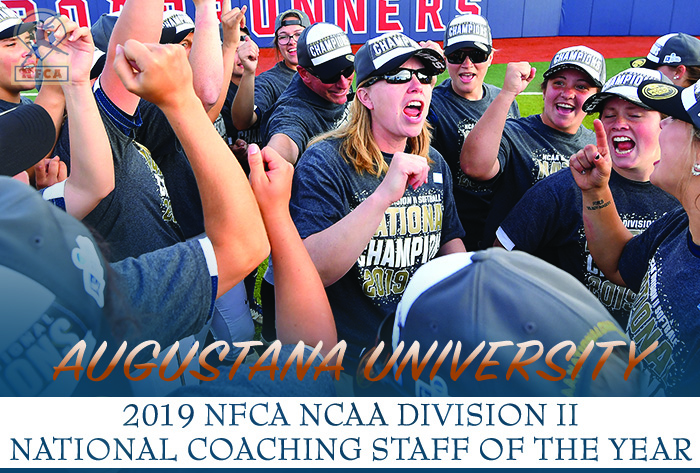 LOUISVILLE, Ky. – Following Augustana University’s run to a 2019 NCAA Division II national championship, head coach Gretta Melsted and her staff have been voted by their peers as the NFCA Division II National Coaching Staff of the Year, the Association announced Wednesday morning.

Melsted, along with assistant coaches Nat Wagner and Kelsey Thompson, guided the Vikings to 61-11 overall and 27-3 Northern Sun Intercollegiate Conference (NSIC) records and the program’s second national title.  Augustana , which matched a program record for wins and posted a 10-2 NCAA postseason mark, finished second in the NSIC regular season, won the league tournament, and entered NCAA Regionals as the Central Region’s No. 3 seed.

The Vikings knocked off the top two region seeds – No. 2 Winona State (regionals) and No. 1 Central Oklahoma (super regionals) – on the road to reach the NCAA National Championships. Entering as the No. 3 overall seed, Augustana reached the Championship Series by defeating No. 6 UC San Diego, No. 2 West Florida and No. 8 Young Harris. After dropping game one to No. 4 Texas A&M University-Kingsville, Augustana rallied for a pair of 6-4 wins to capture the title.