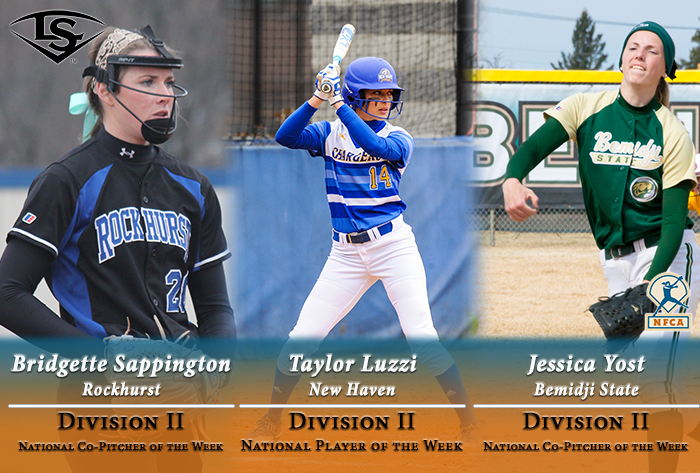 Luzzi hit .545 (12-for-22) with three doubles, two homers, 11 RBI and nine runs keying the Chargers to a 5-1 week, which included a doubleheader sweep of then-No. 23 Adelphi and a split at new-No. 25 Caldwell. Extending her hitting streak to 14 games, Luzzi recorded a hit in all six games and also swiped three bags. She launched a grand slam and knocked in seven runs during a twibill split at Caldwell. Earlier in the week, the Fishkill, N.Y. native scored three times and went 4-for-7 in a doubleheader sweep of the Panthers.

Sappington was nearly perfect for the week, not allowing a run or a hit, while fanning 12 over 12 innings of work. She twirled the first perfect game in program history against Maryville on April 1. The Peculiar, Mo. native struck out seven in the 3-0 over the Saints. Sappington, who was 3-0 on the week, also earned a pair of wins in relief. Named Great Lake Valley Pitcher of the Week, she tossed a perfect eighth inning in game one against Maryville in a 5-4 walk-off victory and provided four innings of no-hit relief (6 K, 3 BB), helping the Hawks knock off Missouri St. Louis, 6-2.

Highlighted by a perfect game, Yost was 5-0 in the circle for the Beavers last week. The right-handed hurler posted a 0.29 ERA with three shutouts, 44 strikeouts to just one walk over 24 innings. Yost, a hometown product, opened the week with a 12-strikeout (5 inn.) perfecto in game one against Minnesota Crookston and then struck out eight more Golden Eagles over four innings in game two. Yost posted two more five-inning shutouts against Minnesota State University, Moorehead (5 H, 7 K, 0 BB) and Northern State (4 H, 7 K, 0 BB). Those performances were sandwiched around a five-inning complete game against Northern State in which she allowed an unearned run, struck out 10 and did not walk a batter. For the week, the Northern Sun Pitcher of the Week held her opponents to a .123 batting average.