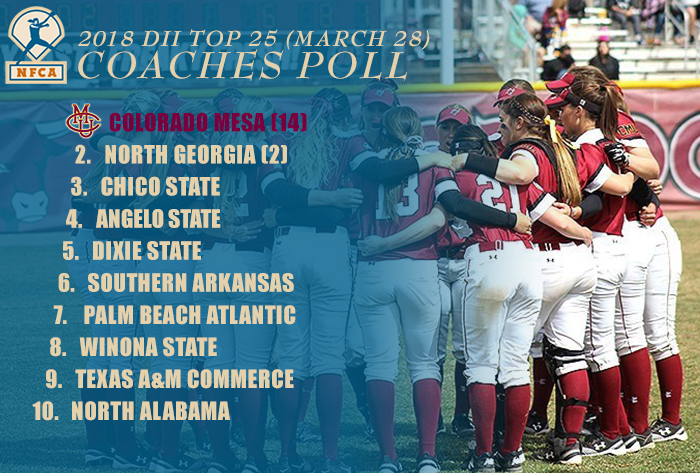 LOUISVILLE, Ky. – Colorado Mesa continued its undefeated start and the top three teams remained the same in the NFCA Division II Top 25 Coaches Poll. The Mavericks (30-0) collected 14 first-place votes and 398 points, followed by No. 2 North Georgia (2 / 386) and No. 3 Chico State (368).

CMU, who joined the 30-win ranks, swept a fifth Rocky Mountain Athletic Conference series to improve its league-best mark to 20-0.

UNG’s pitching staff posted four shutouts in a pair of Peach Belt Conference doubleheader sweeps to extend the NightHawks (36-1) winning streak to 13 games. The Wildcats (31-3) also reached the 30-win plateau over the weekend, posting a 5-0 mark at the Tournament of Champions.

No. 8 and idle Winona State (21-3) and No. 9 Texas A&M University-Commerce stayed did not move, while the previously-mentioned Lions (24-4), dropped two of three at home to Mississippi College and fell to No. 10.

University of Alabama in Huntsville and McKendree join the poll at No. 22 and 25, respectively. No. 20 Saint Leo and No. 24 Valdosta State exited the poll.

The 2018 NFCA Division II Top 25 Poll is voted on by 16 NCAA Division II head coaches with two representing each of the eight NCAA regions. Records reflect games played through March 25, 2018.

New to Poll: No. 22 University of Alabama in Huntsville, No. 25 McKendree