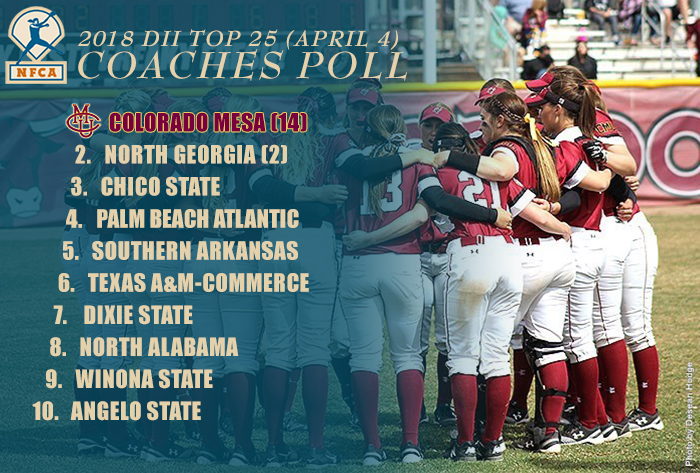 LOUISVILLE, Ky. – Colorado Mesa continued to roll through conference play and enters its fifth straight week at No. 1 in the NFCA Division II Top 25 Coaches Poll. The undefeated Mavericks (34-0) received 14 first-place votes and 398 points, followed by No. 2 North Georgia (2 / 386) and No. 3 Chico State (366). A red-hot Augustana squad enters the poll for the first time this season at No. 16.

Augustana has rebounded from a 1-4 start to the season to win 23 of its last 25, including six straight last week in Northern Sun Intercollegiate Conference play. Two of those triumphs came in a doubleheader sweep of then-No. 13 Minnesota State (5-4, 8-6).

No. 5 Southern Arkansas, No. 6 Texas A&M University-Commerce, riding a 15-game winning streak, and No. 8 North Alabama (7-0 last week) all improved their positions in the top-10, while No. 7 Dixie State, No. 9 Winona State and No. 10 Angelo State slipped in the poll.

No. 24 Saint Leo returned after a one-week absence, while University of Alabama in Huntsville and McKendree dropped out.

The 2018 NFCA Division II Top 25 Poll is voted on by 16 NCAA Division II head coaches with two representing each of the eight NCAA regions. Records reflect games played through April 1, 2018.