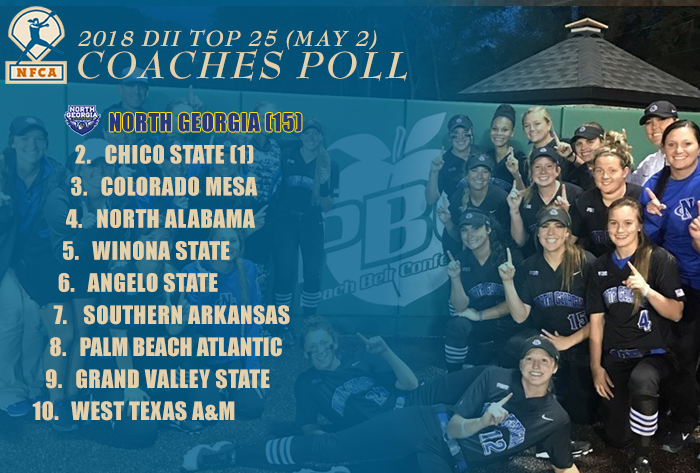 Chico State and Colorado Mesa, who both clinched their league’s regular season titles, swept their final conference series to hold firm at No. 2 and No. 3, respectively. The Wildcats (47-3) swept San Francisco State to extend their winning streak to 22 games and finish with a 37-3 mark in the California Collegiate Athletic Association. The Mavericks (43-3) took all four games from CSU-Pueblo and will host the Rocky Mountain Athletic Conference tournament this weekend.

North Alabama moved up one spot to No. 4, while Winona State entered the top five for the first time in 2018. The Lions (42-5) took two of three from Gulf South Conference (GSC) foe and then-No. 18 UAH and will be the top seed and host of the GSC Softball Championship. The Warriors (41-5) capped off their regular season with 11 straight wins, six last week, to earn their first Northern Sun Intercollegiate Conference regular season title since 2007 and fourth overall.

Angelo State stood pat at No. 6, while Southern Arkansas dipped to No. 7. The Rambelles (45-7) clinched the Lone Star Conference (LSC) regular season and will host the LSC Tournament.  The Lady Muleriders (49-7) put forth a 2-2 showing at Southeastern Oklahoma State and dropped three of their last five contests. SAU ran away with the Great American Conference (GAC) regular season and will be the No. 1 seed at the GAC Tournament.

Palm Beach Atlantic (33-6) stood still at No. 8, while Grand Valley State inched up to No. 9 and West Texas A&M moved up to No. 10. The Sailfish (33-6) already clinched their NCAA bid with a Sunshine State Conference regular season title. The Lakers (35-7) and Lady Buffs (38-10) are the No. 1 and 2 seeds in the GLIAC and LSC tournaments, respectively.

Several NCAA postseason berths are on the line this weekend with conference tournament champions being crowned all over the country. The NCAA tournament field will be announced on Monday, May 7 at 10:00 a.m. ET on NCAA.com.

The 2018 NFCA Division II Top 25 Poll is voted on by 16 NCAA Division II head coaches with two representing each of the eight NCAA regions. Records reflect games played through April 29, 2018.