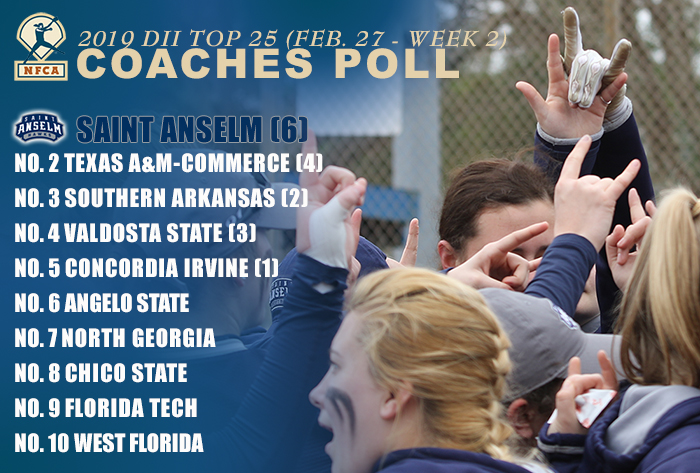 LOUISVILLE, Ky. – For the first time in program history, Saint Anselm will be the No. 1 team in NFCA Division II Top 25 Coaches Poll. The Hawks’ (5-0), who were idle last week, collected six first-place votes and 379 points.

There were more shifts in the rankings as several nationally-ranked teams dropped contests or did not play at all due to weather. Five programs received first-place votes, and seven points separated No. 1 through No. 3.

Texas A&M University-Commerce picked up four first-place nods and 376 points. The Lions (16-2) leapfrogged three spots after a 4-1 week. Following a defeat to Texas A&M International, Commerce rebounded with a win over the Dust Devils, and a three-game Lone Star Conference (LSC) sweep at Texas Permian Basin.

Southern Arkansas, Valdosta State and Concordia Irvine come in at No. 3-5. The Muleriders (10-3) completed just one of its four Great American Conference (GAC) contests at Harding, defeating the Bisons 9-5 in eight innings on Feb. 24 with game two suspended in the sixth. The Blazers (10-2) did not play.

The Eagles (11-1) enjoyed a 7-0 week as they swept Adelphi in a three-game non-conference series and earned PacWest doubleheader victories over Biola and Azusa Pacific.

Previous No. 1 Angelo State dropped four of five contests last week. The Rambelles (14-5) split a midweek twinbill at St. Mary’s before being swept at home by new-No. 21 West Texas A&M in their LSC opener. It marked the first series sweep for the Lady Buffs (11-4) in San Angelo, Texas.

No. 7 North Georgia and No. 8 Chico State also dipped in the rankings. The NightHawks went 3-2 at the DII Florida Tech Invitational. UNG topped Barry, Lynn and Converse, but were defeated by Palm Beach Atlantic and then-No. 14 Florida Tech.

The red-hot Panthers (15-2) have won 14 straight and moved into the No. 9 spot after sweeping through the competition at the Central Florida Spring Training Complex. Highlighting the five wins was Melanie Mitchell’s perfect game against then-No. 3 North Georgia. FIT also knocked off Columbus State, Converse, Flagler and Georgia College.

West Florida remained at No. 10 following a Gulf South Conference road sweep of Auburn-Montgomery. The Argos (16-1) blanked the Warhawks over the three games to extend their winning streak to 12 games with a 1-0 defeat to No. 9 Florida Tech as the only blemish on their schedule.

The 2019 NFCA Division II Top 25 Poll is voted on by 16 NCAA Division II head coaches with two representing each of the eight NCAA regions. Records reflect games played through Feb. 24, 2019.