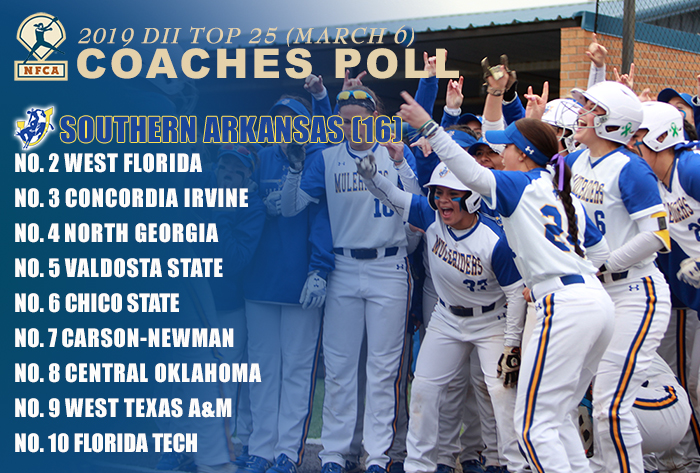 LOUISVILLE, Ky. – Southern Arkansas is the fourth different No. 1 team as it grabs the top spot in this week’s 2019 NFCA Division II Top 25 Coaches Poll. The Muleriders (17-3) first-ever No. 1 ranking was unanimous as they collected all 16 first-place votes and 400 points.

The poll continued to shift around, as only two programs - No. 16 UAH and No. 23 Southern New Hampshire – stayed in their previous week’s positions. This week No. 15 Texas A&M-Kingsville and No. 21 Wingate, who were both unranked, enter the poll as newcomers.

The Javelinas (19-2) are coming off a Lone Star Conference sweep of then-No. 2 Texas A&M University-Commerce to earn their first ranking since 2009. The Bulldogs (16-2) have won 16 straight after dropping their first two games of the season. Wingate returns to the rankings for the first time since 2015.

Another red-hot program, West Florida, rose to No. 2 this week following a 5-0 week. The Argos (21-1) become the first Division II program to reach the 20-win plateau after sweeping a twinbill from Miles and take all three Gulf South contests against Mississippi College.

Idle Concordia Irvine, North Georgia, Valdosta State make up the three through five spots. The NightHawks (17-5) won both their contests over Palm Beach Atlantic and Catawba in a weather-shortened week. Valdosta State posted a 3-1 mark, splitting at Flagler and taking the first two GSC games from Union.

No. 6 Chico State won a pair of California Collegiate Athletic Association road games at Cal State San Marcos, while No. 7 Carson-Newman earned four road wins, two each at Augusta and Limestone. The Eagles (13-0) are the only undefeated team in the top 25.

The 2019 NFCA Division II Top 25 Poll is voted on by 16 NCAA Division II head coaches with two representing each of the eight NCAA regions. Records reflect games played through March 3, 2019.