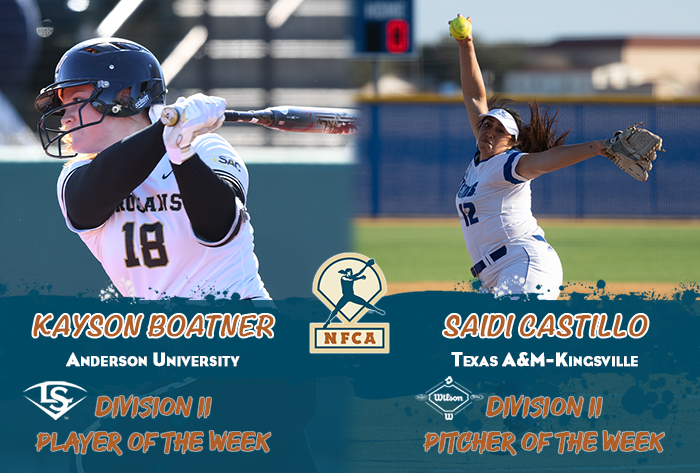 Over a six-game stretch, Boatner hit .650 with 13 hits, eight of which left the yard, 19 RBI, 13 runs scored and a 1.900 slugging percentage. She homered, recorded an RBI and scored in each contest. Boatner clubbed two home runs and drove in five against Frostburg State and capped off the week with two more long balls, including a game-ending grand slam, seven RBI and three runs scored versus Augusta. The senior first baseman scored at least twice in every game and recorded five multi-hit contests helping the 23rd-ranked Trojans to a 6-0 showing last week.

Castillo tossed back-to-back three-hit shutouts leading the 20th-ranked Javelinas to a 5-0 mark in Portland, Texas. In a 7-0 victory over Ouachita Baptist, the senior righty did not allow an extra-base hit and faced just three batters over the minimum. She followed that with a 11-strikeout zero-walk performance versus Henderson State in which she allowed two singles and a double and faced just two batters over the minimum. She finished the weekend 2-0 with a 0.00 ERA, 17 strikeouts and two walks.

The Division II Player and Pitcher of the Week awards are voted on by the NFCA Division II Top 25 Poll Committee, which consists of two head coaches from each of the NCAA’es eight regions. To be eligible, student-athletes must be nominated by their member head coach.