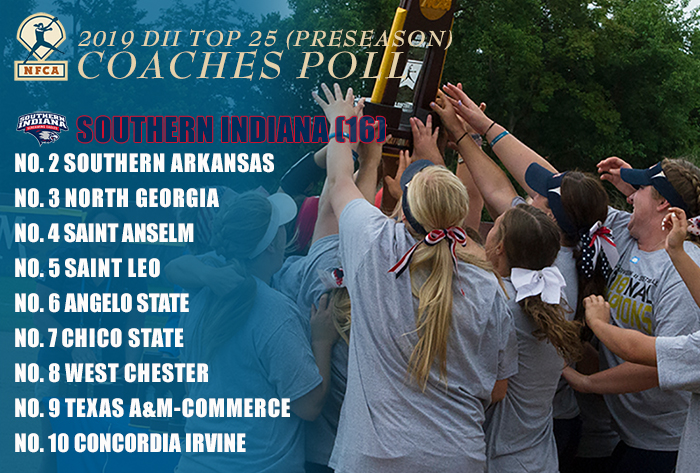 LOUISVILLE, Ky. – Defending national champion Southern Indiana was the unanimous No. 1 selection in the 2019 NFCA Division II Top 25 Preseason Poll, announced by the Association on Wednesday. The Screaming Eagles (41-23) garnered all 16 first-place votes and 400 points.

Behind a miraculous run through postseason, USI became the first women’s program at the school to win a team national title. The Screaming Eagles, under the direction of Sue Kunkle, went 5-0 as the eight-seed at the NCAA Championships, sweeping second-seeded Saint Anselm in the Championship Series. Including a 4-0 run through the Great Lakes Valley Conference (GLVC) Tournament, Southern Indiana went 14-1 after the regular season concluded. The sweep gave the 2019 GLVC preseason favorites their first tournament title.

The first eight spots in the poll are the 2018 National Championships’ participants.

National semifinalist and Great American Conference (GAC) favorites Southern Arkansas (363) and North Georgia came in at No. 2 and No. 3. Both programs reached the 60-win plateau, the only two NCAA programs to reach this milestone. The 60 wins by the Lady Muleriders set a program record. The NightHawks enter as the Peach Belt favorites and their 62-4 mark was the most wins amongst NCAA programs.

National runner-up Saint Anselm was selected fourth. The Hawks (44-13-1) reached the Championship series in their first-ever National Championships appearance. Saint Anselm smashed its single-season win record by 10 as head coach Jill Gagnon was named 2018 NE-10 Coach of the Year. The 2019 Northeast-10 Northeast Division favorites won their first seven games of the NCAA postseason and finished 8-3 overall. Six of those wins were by one or two runs.

No. 5 Saint Leo, a national semifinalist, collected 341 points, while No. 6 Angelo State earned 330 points. Chico State picked up 320 points and West Chester University 274 points. The Lions and Wildcats were also voted as the Sunshine State Conference’s and California Collegiate Athletic Association’s No. 1 teams in 2019.

Rounding out the top 10 is No. 9 Texas A&M University-Commerce and No. 10 Concordia Irvine.

The Lone Star Conference led the way with three programs- No. 6 Angelo State, No. 9 Texas A&M University-Commerce and No. 14 Tarleton State- in the top 25. Nine other leagues had two representatives each.

The 2019 NFCA Division II Top 25 Poll is voted on by 16 NCAA Division II head coaches with two representing each of the eight NCAA regions. Records are from the conclusion of the 2018 season.

The 2019 NFCA Division II Top 25 Coaches Poll is voted on by 16 NCAA Division II head coaches with two representing each of the NCAA’s eight regions.