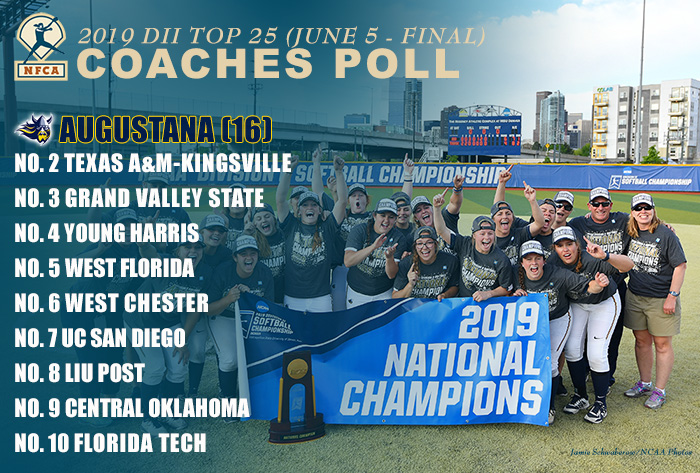 LOUISVILLE, Ky. – Following a run to the 2019 national championship, Augustana was voted the unanimous No. 1 team in the final NFCA Division II Top 25 Coaches Poll. The Vikings (61-10), who captured their program’s second national title, earned all 16 first-place votes and 800 points.

The top eight spots were filled by each of the NCAA Division II’s region champions with the ninth and 10thpositions held by Super Regional participants, Central Oklahoma and Florida Tech.

Augustana posted a 10-2 mark during its NCAA postseason run, which saw the Vikings knock off No. 2 Winona State in Regionals and No. 1 Central Oklahoma in Super Regionals, both on the road. Bouncing back from a defeat in game of the Championship Series, Augustana rallied for a pair of 6-4 wins over Texas A&M-Kingsville to come out on top of Division III. Matching a single-season record with 61 victories, Augustana won the 2019 Northern Sun Intercollegiate Conference tournament after finishing second in the regular season.

National runner-up Texas A&M-Kingsville comes in at No. 2. The Javelinas (52-10) made their first National Championships appearance as they recorded the best campaign in program history in terms of wins, winning percentage and national finish. TAMUK opened NCAA postseason play with nine straight victories, including game one of the Championship Series. Captured the No. 1 seed in the South Central Region after claiming both the Lone Star Conference’s regular season and tournament titles.

No. 3 Grand Valley State reached the national semifinals in the programs’ fourth NCAA Championships appearance. The Lakers (51-10) won both the Great Lakes Intercollegiate Athletic Conference regular season and tournament championships. As the Midwest’s No. 1 seed, GVSU swept through regionals and Super Regionals with a 5-0 mark, before going 2-2 at the national championships.

Another first-time NCAA Championships participant, Young Harris jumped back into the poll at No. 4. The Mountain Lions (44-20) captured the Southeast Region title, by knocking of host and No. 1 seed North Georgia in the Regionals and sweeping Lincoln Memorial on the road in Super Regionals. YHC posted a 7-3 postseason record, which included a win over No. 1 overall seed LIU Post in the NCAA Championships’ opening game.

No. 5 West Florida, which spent four weeks at No. 1 during the regular season, was the NCAA Championships’ No. 2 overall seed. The Argonauts (54-11) posted the most victories since 2005 and claimed the Gulf South Conference’s regular season and tournament titles. UWF earned the South Region’s No. 1 seed and made a 16.5 game improvement from a season ago.

No. 6 West Chester, entering the rankings for the first time since the preseason poll, returned to the NCAA Championships for the second straight season as the Atlantic Region champions. The six-time Pennsylvania State Athletic Conference regular season champs won the East Regional as the No. 4 seed and knocked off Shepherd 2-1 in Super Regionals. The Golden Rams (40-22) finished postseason play with a 6-3 mark.

No. 7 UC San Diego earned the West Region’s No. 2 seed and the Championships’ No. 6 seed. The Tritons (37-17) won the California Collegiate Athletic Association’s regular season and swept through regionals and Super Regionals (at No. 1 Concordia Irvine).

First-time Super Regional participant Cameron and South Regional finalist Tampa enter the poll for the first time this season at No. 11 and No. 23, respectively. Also returning to the top-25 is No. 13 Lincoln Memorial, No. 19 Shepherd and No. 25 Southern Indiana.

The 2019 NFCA Division II Top 25 Poll is voted on by 16 NCAA Division II head coaches with two representing each of the eight NCAA regions.

The 2019 NFCA Division II Top 25 Coaches Poll is voted on by 16 NCAA Division II head coaches with two representing each of the NCAA’s eight regions.