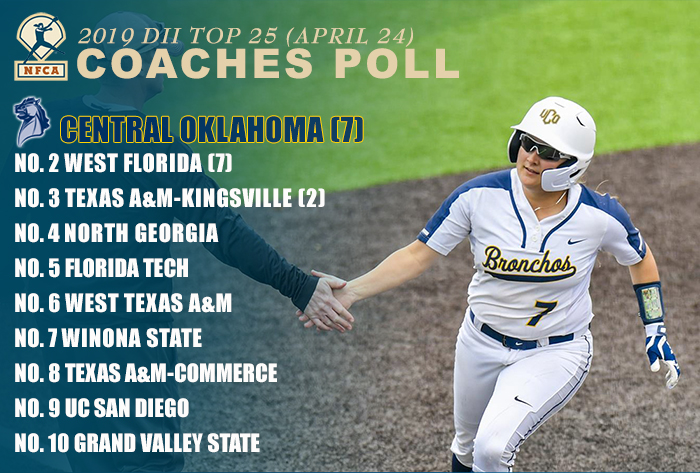 LOUISVILLE, Ky. – Central Oklahoma edged out West Florida by one point to grab the No. 1 spot in this week’s 2019 NFCA Division II Top 25 Coaches Poll. The Bronchos (38-4) and Argonauts (39-7) each received seven first-place votes, but UCO collected 384 points to UWF’s 383 to garner their first No. 1 ranking since the 2014 preseason poll.

Central Oklahoma, the eighth different No. 1 ranked program in 2019, has been a mainstay in the top 10 since March 6 and held down the No. 2 spot the last five weeks. UCO posted a 3-1 mark in Mid-America Intercollegiate Athletics Association (MIAA) play last week, sweeping Emporia State and splitting a twinbill with Washburn, suffering its first home loss of 2019. With four games left in the regular season, the Bronchos enter the final week with a three-game lead over Missouri Western in the MIAA standings.

West Florida’s run of four straight weeks at No. 1 was snapped after it dropped both games of a Gulf South Conference doubleheader at then-No. 18 UAH, its first GSC series loss of the season. The Argonauts still hold a three-game lead in the loss column over the Chargers heading into the final week of the regular season.

No. 3 through No. 8 remained the same as those programs went through the week unscathed. No. 3 Texas A&M-Kingsville collected the final two first-place votes and 376 points. The Javelinas bounced back from a 2-3 week with a three-game Lone Star Conference sweep of Midwestern State. TAMUK heads into the final week of the regular season in a three-way tie for first place with No. 8 Texas A&M-Commerce and No. 6 West Texas A&M.

The Javelinas, who close out league play at Texas Permian Basin, currently own the tiebreaker having swept the Lions (36-10), who were idle last week, and won the series versus the Lady Buffs, who are coming off a three-game sweep of Texas Woman’s.

No. 5 Florida Tech swept Florida Southern on the road and are tied with Tampa atop the Sunshine State Conference standings with one weekend to go. The Panthers (36-10) close out their regular season with Eckerd, while the Spartans battle Saint Leo. UT owns the tiebreaker having taken two-of-three from FIT earlier in the season.

No. 7 Winona State extended its program-record winning streak to 24 games with an 8-0 week in Northern Sun Intercollegiate Conference action. Undefeated in the NSIC and the month of April, the Warriors (39-5) hold a two-game lead over No. 14 Augustana in the league standings. Owning the tiebreaker with the Vikings (42-7), the Warriors have six remaining conference contests this week.

UC San Diego (29-10) went 3-1 at Cal State San Marcos and moved up to No. 9 this week, while Grand Valley State returned at No. 10 following a brief top-10 absence. The Lakers (36-8) put forth a 7-1 week in Great Lakes Intercollegiate Athletic Conference play. Both squads hold slim leads in their respective league standings as they head into the home stretch.

This week’s poll welcomes No. 24 Lincoln Memorial and t-No. 25 Mississippi College back into the rankings. Then-No. 23 Georgia College dropped out.

The 2019 NFCA Division II Top 25 Poll is voted on by 16 NCAA Division II head coaches with two representing each of the eight NCAA regions. Records reflect games played through April 21, 2019.

Dropped Out: No. 23 Georgia College.