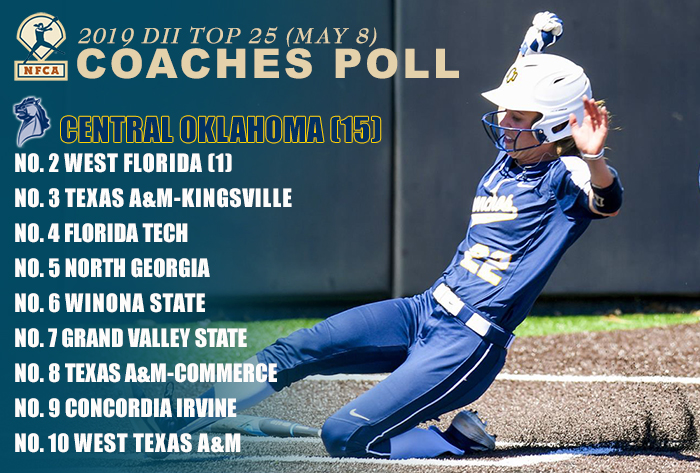 In all, the top six spots remained the same and no team moved in out of the top ten this week with Great Lake Valley Conference (GLVC) co-regular season and tournament champion Missouri-St. Louis entering at No. 24 for the first time in 2019.

With the MIAA double, UCO will stay home as the Central Region’s top seed. The Bronchos won their second tournament title in three years, sweeping the competition over four days by a 37-7 margin. UCO will open with Minnesota Duluth and also No. 12 Arkansas Tech and No. 18 Southern Arkansas to Edmond, Okla.

No. 2 West Florida, with one first-place vote, and No. 3 Texas A&M-Kingsville also swept through their respective conference tournaments and will be the top seeds in the South and South Central Regions. The Argos (47-8) dispatched Delta State, West Alabama, then-No. 18 Valdosta State and West Georgia to win their fourth Gulf South championship and earn the right to host Southern Intercollegiate Athletic Conference champion Spring Hill in the first round of the NCAA Regionals.

Following a first-round bye, the Javelinas (43-8) knocked off No. 19 Tarleton State and then-No. 7 Texas A&M-Commerce to win their second Lone Star Conference (LSC) tournament title, the first since 2002. In their first NCAA Regional since 2007, TAMUK will host Heartland Conference champion Oklahoma Christian.

No. 4 Florida Tech, No. 5 North Georgia, No. 6 Winona State and No. 9 Concordia Irvine are top regional seeds for the NCAA Championships. The Panthers’ (39-10) and Eagles’ (44-6) respective Sunshine State and PacWest Conferences enjoyed a week off as their conferences do not have a league postseason tournament.

The fifth-ranked NightHawks (42-11) and seventh-ranked Lakers (44-8) captured their conference tournament titles. North Georgia had to rally from deficits in the opener against UNC Pembroke and the title game against Flagler to win their sixth consecutive Peach Belt Conference championship. Grand Valley cruised to its first three wins by a combined score of 28-4, before edging Northwood, 2-1 for the Lakers’ second straight championship. UNG, in the Southeast Regional, hosts Conference Carolinas’ champion Lees-McRae, while Grand Valley, in the Midwest, hosts Great Midwest Athletic Conference tournament winners Hillsdale.

No. 6 Winona State finished runner-up in the Northern Sun Intercollegiate Conference Tournament. The Warriors (50-7) had their 31-game winning streak snapped by Minnesota State, but managed to win four straight elimination games before falling to No. 15 Augustana in the final. They join the Vikings (51-9) as the only 50-win programs in NCAA Division II. Winona earned the No. 2 seed and will be the host of the No. 2 Central Regional, which will also feature Augustana and their first-round opponents St. Cloud State.

No. 8 Texas A&M-Commerce finished as the LSC tournament runner up and is the South Central Region’s No. 2 team, hosting Rocky Mountain Athletic Conference champion Dixie State.

No. 10 West Texas A&M dropped a spot after bowing out of the LSC tournament in the first round. The Lady Buffs (31-13) will head to Kingsville as the South Central’s fourth seed.

Poll newcomer No. 24 UMSL will be the Midwest’s second seed and host an all-GLVC regional with No. 12 Indianapolis, Truman State and Illinois Springfield.

The final No. 1 NCAA Regional seed is No. 20 Saint Anselm, which captured the Northeast-10 tournament championship, knocking off New Haven, 5-1, and Adelphi, 4-3 in 10 innings. Last year’s national runner-up, the Hawks host East Coast Conference champions Bridgeport, Georgian Court and Southern New Hampshire in the first round.

NCAA Regional play kicks off on Thursday, May 9 and will conclude on Saturday, May 11.

The 2019 NFCA Division II Top 25 Poll is voted on by 16 NCAA Division II head coaches with two representing each of the eight NCAA regions. Records reflect games played through May 5, 2019.

Dropped Out: No. 22 Southern Indiana

The 2019 NFCA Division II Top 25 Coaches Poll is voted on by 16 NCAA Division II head coaches with two representing each of the NCAA’s eight regions. Records reflect games played through May 5.