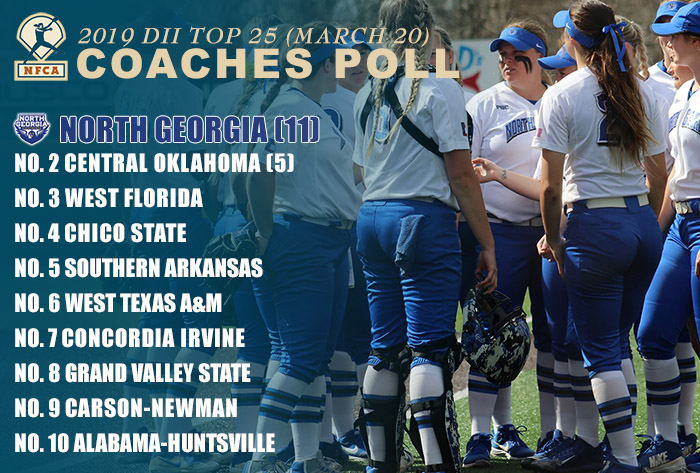 LOUISVILLE, Ky. – The musical chairs continued as North Georgia is the sixth consecutive new No. 1 in the 2019 NFCA Division II Top 25 Coaches Poll. The NightHawks (26-6) received 11 first-place votes and 393 points to return to the top spot, a ranking they held the final three weeks of the 2018 season.

UNG knocked off a pair of ranked teams – then-No. 21 Wingate, then-No. 2 West Florida - to start the week. They rolled into Peach Belt Conference play, sweeping UNC Pembroke and Francis Marion in a pair of league doubleheaders.

Central Oklahoma, which received the other five first-place votes, continued to rise, reaching No. 2 after a pair of Mid-America Intercollegiate Athletics Association doubleheader sweeps of Lindenwood and Lincoln. The four triumphs extended the Bronchos (24-1) winning streak to 20 games, second longest in program history.

No. 5 Southern Arkansas, No. 6 West Texas A&M, No. 8 Grand Valley State and No. 10 University of Alabama in Huntsville all made positive jumps, while No. 7 Concordia Irvine and No. 9 Carson-Newman fell in the Top-10.

The Muleriders (22-6) bounced back with a four-game sweep at East Central in a Great American Conference series. The Lady Buffs (22-6) posted a 4-1 mark, winning two games at Metro State and two of three versus Lone Star Conference foe Texas A&M-Commerce. The Lakers (16-2) swept a doubleheader from then-No. 19 Cedarville, while the Chargers (22-7) went 3-1 in Gulf South Conference play. UAH finished off a sweep of Lee and then took two of three at West Georgia.

The seventh-ranked Eagles (19-3) fell from the No. 1 spot after a 4-2 week. CUI split four games against Hawai’i Pacific and posted two wins over Stanislaus State. The No. 9 Eagles (14-1) dropped their first game of the 2019 season, splitting at Queens (N.C.) in South Atlantic Conference play.

Joining the poll for the first time this season are No. 23 Lincoln Memorial and No. 24 Western Oregon. The Wolves (12-4) are joined at No.24 by Angelo State, making a return following one-week hiatus. The 23rd-ranked Lady Railsplitters have won 13 of their last 14 contest, which included a split with then-No. 20 Wingate over the weekend.

The 2019 NFCA Division II Top 25 Poll is voted on by 16 NCAA Division II head coaches with two representing each of the eight NCAA regions. Records reflect games played through March 17, 2019.