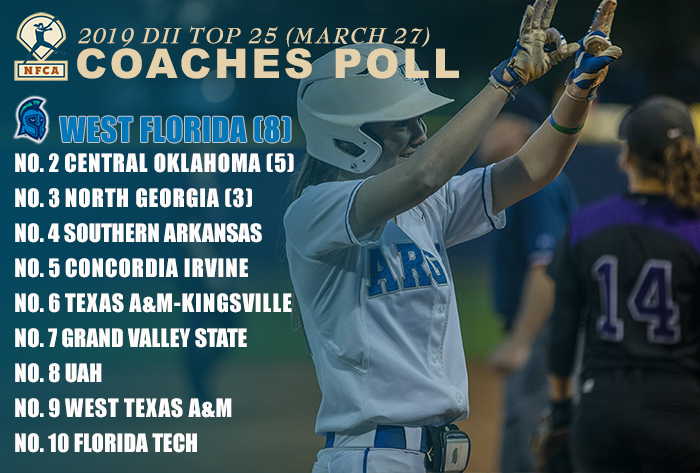 LOUISVILLE, Ky. – West Florida rose to No. 1 for the first time since 2005 in the 2019 NFCA Division II Top 25 Coaches Poll. The Argonauts (31-4), who won four games on the road last week, edged out Central Oklahoma by four points, capturing eight first-place votes and 385 points. UWF is the seventh consecutive new No. 1 this season.

The Bronchos (26-2) received five first-place votes and 381 points. North Georgia, last week’s No. 1, took home the final three first-place nods and 379 points. No. 4 Southern Arkansas and No. 5 Concordia Irvine improved in their respective rankings to round out the top five

UCO had its 20-game winning streak snapped by new-No. 14 Augustana at the HY-VEE Softball Classic in St. Joseph, Mo., but did bounce back with wins over No. 22 Winona State and Northern State. In their only action of the week, the NightHawks (27-7) split at Young Harris in a Peach Belt Conference doubleheader.

The Chargers (26-8) posted a 4-1 week. UAH swept Young Harris in a mid-week twinbill before taking two-of-three from then-No. 13 Valdosta State in a Gulf South Conference series.

The 2019 NFCA Division II Top 25 Poll is voted on by 16 NCAA Division II head coaches with two representing each of the eight NCAA regions. Records reflect games played through March 24, 2019.

Dropped Out: No. 9 Carson-Newman, No. 25 Western Oregon