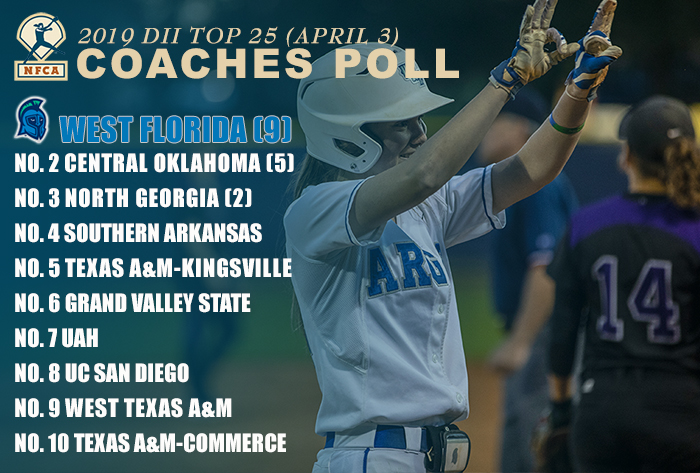 LOUISVILLE, Ky. – West Florida held on to the No. 1 ranking in this week’s 2019 NFCA Division II Top 25 Coaches Poll. The Argonauts (33-5) edged out Central Oklahoma by three points, collecting nine first-place votes and 387 points. UWF is the first program to hold the No. 1 spot for more than one week in 2019.

The Argonauts took two-of-three from West Georgia in Gulf South Conference play. The second-ranked Bronchos (26-2), who did not play due to inclement weather last week, earned five first-place votes and 384 points. No. 3 North Georgia, coming off a 5-1 week, captured the final two first-place votes and 370 point.

Southern Arkansas held steady at No. 4 following a 6-0 week. The Muleriders (32-6) posted a pair of non-conference shutouts of Arkansas-Monticello before cruising through a Great American Conference sweep of Oklahoma Baptist in which they outscored the Bison, 47-6.

UC San Diego broke into the top 10 for the first time since 2013’s preseason poll. The Tritons (25-6) swept through the Tournament of Champions with a perfect 5-0 mark. One of three undefeated teams, it was UCSD’s best tournament finish since 2006.

Three teams entered the rankings this week to fill up the final three spots. No. 23 Tarleton State, which was ranked in the first three polls of the season, returns at No. 23. Two brand new faces – No. 24 Rollins and No. 25 Shepherd – are riding double-digit winning streaks. The Tars (30-5), who sit atop the Sunshine State Conference standings at 14-4, have won 10 straight and 13 of their last 14 contests. The Rams (21-5) have reeled off 15 straight victories and lead the Mountain East Conference’s North Division at 11-1.

No. 5 Texas A&M-Kingsville, No. 6 Grand Valley State and No. 7 University of Alabama in Huntsville all inched up one spot in the poll. The Javelinas picked up a crucial Lone Star Conference (LSC) series win on the road at No. 9 West Texas A&M. TAMUK bounced back from a game one defeat with a doubleheader sweep of the Lady Buffs (24-10) to retake first place in the league standings.

The Lakers (21-3) picked up a mid-week doubleheader sweep of Wisconsin-Parkside in Great Lakes Intercollegiate Athletic Conference play, while the Chargers (30-9) posted a 4-1 mark last week.

Texas A&M-Commerce returned to the top-10. The Lions (30-9) swept then-No. 24 Angelo State in LSC play, along with two mid-week wins over Rogers State.

The 2019 NFCA Division II Top 25 Poll is voted on by 16 NCAA Division II head coaches with two representing each of the eight NCAA regions. Records reflect games played through March 31, 2019.