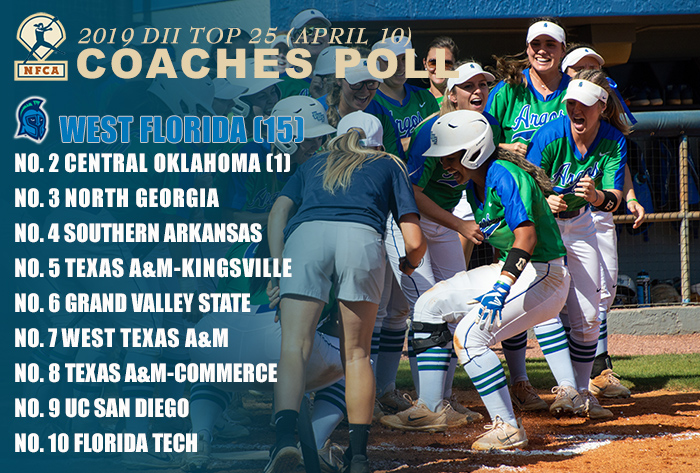 LOUISVILLE, Ky. – West Florida was nearly the unanimous No. 1 as the top six teams remained steady in this week’s 2019 NFCA Division II Top 25 Coaches Poll. The Argonauts (36-5) captured 15 of the 16 first-place votes and 399 points after sweeping Union in a three-game Gulf South Conference series.

No. 10 Florida Tech returned to the top-10 following a short absence. The Panthers (30-10) picked up a key Sunshine State Conference series win on the road at then-No. 24 Rollins.

No. 20 Georgia College and No. 22 Sonoma State make their first appearances of the season in the top-25. The red-hot Bobcats (31-10) have reeled off 14 consecutive victories, including a pair of doubleheader sweeps of Emmanuel and Lander last week. The Seawolves (24-10) took three-of-four at Cal State San Marcos in CCAA play. The defeat in the series finale snapped a 14-game winning streak.

No. 25 Southern Indiana returns after starting the season as the preseason favorite. The Screaming Eagles (25-13) have won six straight and nine of their last 10 contests.

Making way for the three newcomers by dropping out of the poll were No. 13 Chico State, No. 18 Lincoln Memorial and No. 20 Wayne State (Mich.).

The 2019 NFCA Division II Top 25 Poll is voted on by 16 NCAA Division II head coaches with two representing each of the eight NCAA regions. Records reflect games played through April 7, 2019.