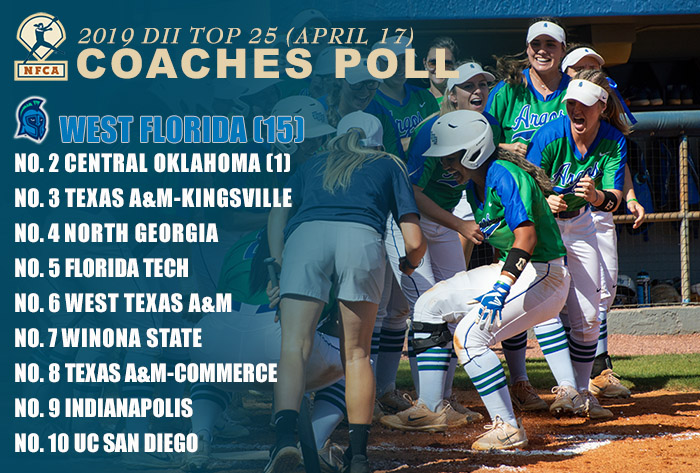 LOUISVILLE, Ky. –  West Florida and Central Oklahoma went undefeated in conference play and continued their respective holds on the No. 1 and 2 spots in this week’s 2019 NFCA Division II Top 25 Coaches Poll. The Argonauts (39-5) enter their fourth week atop the poll, while the Bronchos (35-3) have held on to the No. 2 ranking for five consecutive weeks.

UWF, which received 15 first-place votes and 399 points, swept Lee in Gulf South Conference play and now own a five-game lead over No. 18 UAH and five-and-a-half over RV Mississippi College. The Argos have an opportunity to sew up the regular season title this weekend as they head to Huntsville, Ala. for a clash with the second-place Chargers (33-12).

UCO grabbed the final first-place vote and 382 points. The Bronchos swept a pair of Mid-America Intercollegiate Athletics Association doubleheaders from Central Missouri and Southwest Baptist, improving to 17-1 in league play. The MIAA leaders are four games up in the loss column with four doubleheaders remaining on their schedule.

The rest of the top-10 saw movement and two teams – No. 7 Winona State and No. 9 Indianapolis - joined for the first time this season, catapulting ten and nine spots, respectively. The Warriors (31-5) entered this week on a 16-game winning streak after posting doubleheader sweeps of then-No. 12 Augustana and Minnesota-Crookston. The Greyhounds (36-10) have won nine straight and 16-of-their last 18 contests following a 6-0 week.

Despite going 2-3 last week, Texas A&M University-Kingsville shifted up to No. 3. The Javelinas (33-8) split a twinbill against Texas A&M International before dropping two-of-three in Lone Star Conference play at Angelo State.

No. 4 North Georgia slipped one position after being swept on the road by Flagler in Peach Belt Conference play. Florida Tech leaped to No. 5. The Panthers (33-10) swept Nova Southeastern and have won six-of-their-last seven.

Idle West Texas A&M moved up to No. 6 and Texas A&M University-Commerce remained at No. 8 following a Lone Star series win against then-No. 21 Tarleton State. UC San Diego dropped a non-conference doubleheader to Azusa Pacific and fell to No. 10.

Also falling out of the top-10 was then-No. 6 Grand Valley State, which fell to No. 15 after a 3-3 week in Great Lakes Intercollegiate Athletic Conference play.

The 2019 NFCA Division II Top 25 Poll is voted on by 16 NCAA Division II head coaches with two representing each of the eight NCAA regions. Records reflect games played through April 14, 2019.