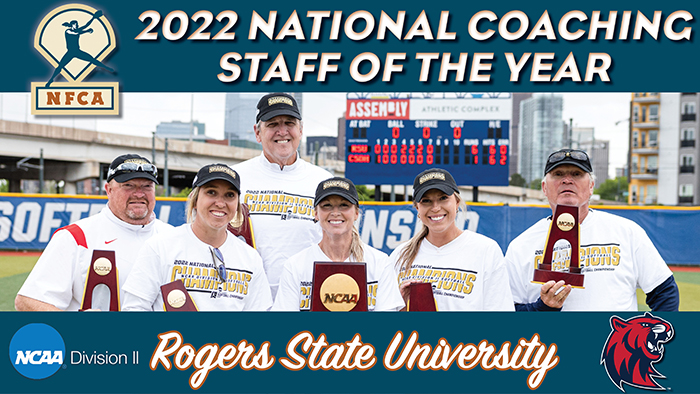 LOUISVILLE, Ky. – National champion Rogers State was voted the 2022 NFCA Division II National Coaching Staff of the Year, announced the Association on Tuesday afternoon. The Hillcats, under the direction of head coach Andrea Vaughan, captured the program’s first national title with an undefeated run through the NCAA DII Championship.

Vaughan, along with assistants Malori Moss, Brent Payne, Danelle Day and volunteer assistant Steve Scott, steered Rogers State to a program-best 58-10 record, shattering the previous mark of 42 set in 2008. In their first-ever Championship appearance, the Hillcats went 5-0, culminating with a Championship Series sweep of Cal State Dominguez Hills. The series was highlighted by a pinch-hit walk off home run in game one.

As the No. 1 seed in the Central Region, RSU won a pair of elimination games before topping Minnesota State in the winner-take-all regional final. They went on the sweep No. 2 seed Central Oklahoma in the Super Regional and earn the program’s first Central Region crown. The Hillcats also won their first Mid-America Intercollegiate Athletic Association tournament title after finishing second in the regular season.

Vaughan, who just completed her seventh season at the helm and 10th overall with the program, is the Hillcats’ all-time wins leader. She earned her 200th career victory April 1 against Lincoln (Mo.) and finished 2022 with 230.

The National Coaching Staff of the Year award is voted on by NCAA DII member head coaches. Vaughan and her staff will be honored at the NFCA Awards Brunch, Dec. 10 at the 2022 NFCA Convention in San Antonio.