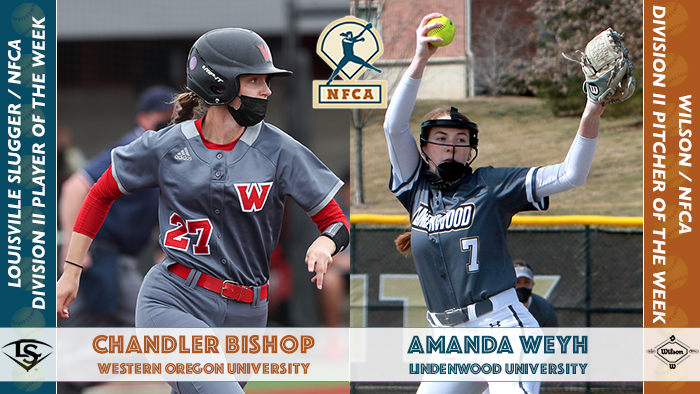 LOUISVILLE, Ky. –Western Oregon’s Chandler Bishop and Lindenwood’s Amanda Weyh were named Louisville Slugger / NFCA Player of the Week and Wilson / NFCA Pitcher of the Week, respectively. They were recognized for their outstanding performances in contests played during the week of March 29-April 4.

Bishop came up clutch for the Wolves in a four-game Great Northwest Athletic Conference series against Northwest Nazarene. Her .636 batting average (7-for-11), double, three home runs and nine RBI helped WOU take the series 3-1. Bishop’s biggest hit of the series was a two-out walk-off grand slam in the 11th of game two. Just hours earlier in the series opener, Bishop, who entered in the top of the fifth, ignited a sixth-inning rally with a two-run shot that tied the game at three (WOU went on to win 4-3). The graduate student from Arlington, Wash. opened the scoring with an RBI double in the first inning of game three and homered for the third time in the finale’s first inning. For the weekend, Bishop slugged 1.545, reached base at a .667 clip and scored four times, while playing flawless defensively at first base.

Weyh tossed a pair of shutouts, including a perfect game against Lewis, and earned a save in three appearances last week. The sophomore was 2-0, struck out 13 and did not allow a run over 14 innings of work. In her perfect game, Weyh fanned one and did not allow a single baserunner to reach in her second collegiate perfect game. The Mokena, Ill. native punched out 10 and issued a walk in a two-hit shutout against Lincoln (Mo.). She also provided two frames of scoreless relief against the Blue Tigers to earn her first collegiate save.