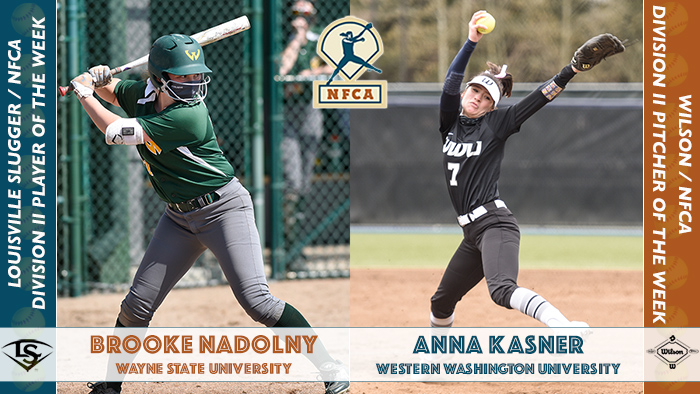 LOUISVILLE, Ky. –Wayne State University’s Brooke Nadolny and Western Washington’s Anna Kasner earned the final Louisville Slugger/NFCA Player and Wilson/NFCA Pitcher of the Week honors of the 2021 campaign. They were recognized for their outstanding performances in contests played during the week of May 3-9.

Behind a strong bat and arm, Nodolny keyed Wayne State to a 3-1 mark in the final week of the regular season. She hit .600 (9-for-15) with four doubles, six runs scored and four RBI and a three multi-hit contests. In the circle, Nadolny went 2-0 with a 0.45 ERA and 12 strikeouts over 15.2 innings of work. She tossed a three-hit shutout versus Purdue Northwest and went the distance with eight strikeouts in a victory over Ferris State. The sophomore from Clinton Township, Mich. recorded a 4-for-4 outing with a pair of doubles, three RBI and two runs in game two against Ferris State.

Kasner captured Great Northwest Athletic MVP honors following a masterful performance to lead Western Washington to the 2021 GNAC Tournament title. The senior hurler form Milton, Wash. went 3-0 with a 0.37 ERA and 38 strikeouts in 19 innings of work. Kasner surrendered just five hits and walked two batters, while holding her opposition to a .080 batting average. In the semifinals, she no-hit regular-season champion Northwest Nazarene, striking out 12 over five innings and was one hit batter shy of a perfect game. Kasner twirled a one-hit gem in the tournament opener against St. Martin’s with 12 punchouts and one free pass. She helped seal the title with a four-hit complete-game effort and a season-best 14 strikeouts against NNU.